Home Brief Big Tech Acquisitions: Google Was The Most Bullish During The Last 5... 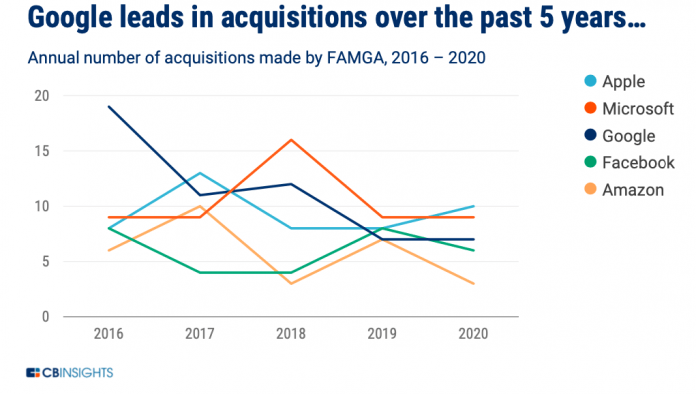 A new CbInsights report reveals the investment and acquisitions activities of the world’s biggest tech giants such as Facebook, Amazon, Microsoft, Google, and Apple (FAMGA) from 2016 to Q1 2021.

The FAMGA’s acquisition activity reached a 5-year low in Q1 2021. Interestingly, Google has always held the pole position among FAMGA in terms of acquisitions during the last five years, though its pace has slowed down significantly. Google’s annual acquisition activity has decreased by 60% since 2016.

The number of acquisitions made by major tech companies, also known as FAMGA, peaked at 50 in 2016, before dropping to 47 the following year. Surprisingly, the total FAMGA acquisition activity fell sharply in the second half of 2020, reaching 35 by the year end.

Facebook, Amazon, Microsoft, and Google, collectively, made 32 $1B+ acquisitions.

In 2020, the group have acquired 5 companies for $1 billion or more, compared to 3 in both 2018 and 2019. Microsoft has made the most $1 billion+ acquisitions among these tech behemoths, at 12 deals. This is followed by Google at 8 deals, and Facebook and Amazon, which tie at 5 deals each. Facebook acquired Kustomer for $1 billion in December 2020, Amazon acquired Zoox for $1.3 billion in June 2020, Microsoft acquired Affirmed Networks for $1.4 billion in April 2020 and ZeniMax Media for $7.5 billion, and Google acquired Fitbit for $2.1 billion.

FAMGA upped its investments to record levels, backing equity deals worth a combined $12.4 billion ($12,362 million) in 2020. That’s a whopping 69.8% YoY growth in big tech investment deals, driven by the blockbuster deals to companies like Reliance Jio, Rivian, and SpaceX.

Interestingly, Google once again led FAMGA in unique investments (16) throughout the Covid-19 pandemic during 2020. By far the most active FAMGA venture arm is Google Ventures, focuses on health-related investments. This is followed by Amazon (14), Microsoft (8), Facebook (4), Apple (1) in 2020.

However, after an aggressive H2 2020, FAMGA pulled back on investments in Q1 2021. Amazon emerged as the most active company in the first quarter, with 4 investments and 3 acquisitions.

The above trend indicates that M&A deals by the tech behemoths are heading for saturation as the market consolidation, at their level, is almost done. Companies are looking to inject as much money as possible in their acquired ventures to strengthen their presence and lead the space with unique offerings and services. The investments in technologies such as AI, VR, Cloud, Gaming have just started bearing fruits and the market the at the cusp of another digital revolution.

While Covid19 has created tough market conditions for many companies, the net worth of top management and founding team of each of FAMGA companies continue to soar during this this testing time. It would be interesting to see how many companies struggling to survive could survive by coming under the umbrella of these tech behemoths by the end of this year.