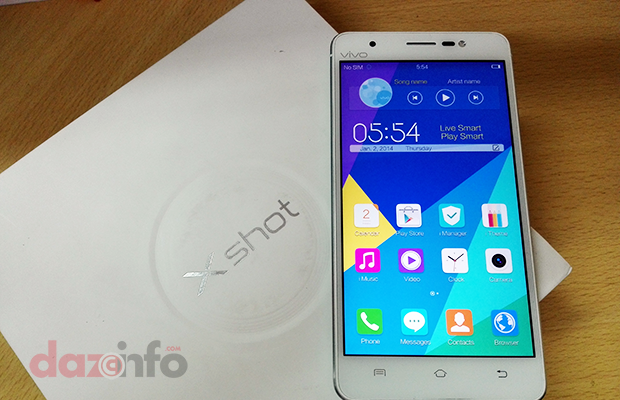 vivo Mobile India Pvt Ltd is a new entrant in the Indian smartphone market. In a market flooded with budget smartphones, packed to the gills with features and the latest technology, it remains to be seen how vivo’s approach is rewarded; in the long run.

The company launched the vivo Xshot in 2014. I have never used a vivo smartphone before so when it was sent to me for user feedback I was a bit skeptical about how it might fare. As a power user of smartphones, I have used several of the top performing smartphones, such as the Xiaomi Mi4, currently available in the Indian market so when a relatively unknown entity was given to me for feedback my skepticism was probably justified.

Just 30 minutes into playing around with the vivo Xshot my doubts were put to rest and a sense of tacit curiosity had kicked in.

If I had to coin a phrase that could be best associated with the vivo Xshot it would be feature-rich. The first thing that struck me about the vivo Xshot was its feature-laden interface. I have always believed that apart from improving upon the existing processing powers and various hardware enhancements, smartphone brands ought to focus on making user interface friendlier and, if possible, more fun for consumers. There are cookie points to be won for making a user interface as consumer friendly and fun to use as possible and boy does vivo score on this front!

The vivo interface brings with it two separate presentation styles. The first is the standard interface that is used across almost all modern smartphones – the Themes. It is the second interface that is brilliantly done by vivo. The second interface is what they call a Scene. By the looks of it the Scene is an interactive layout that makes navigating through the phone a lot more fun compared to the various regular theme launcher interfaces that a lot of companies currently bundle with their smartphones. I absolutely loved the vivo Scene interface.

The Scene is essentially an interface based around real world objects. Clicking on a camera in a Scene actually opens the phone’s camera, the guitar is your music player, the lights are your brightness control, the phone is your dialler, and the little sheep running around the entire Scene opens your menu when tapped upon. Check out these screenshots of the Scene and you would know why I think this interface is praise-worthy. That being said let’s move onto to this phone’s USP – the camera. As the name suggests the vivo xShot is a camera centric smartphone and having used it I can certainly claim that the camera doesn’t disappoint. Bundled with a 13 megapixel rear and an 8 megapixel front camera with double LED flash, the phone lives up to its billing as a high-quality camera phone. The Sony stacked CMOS sensor OIS (Optical Image Stabilization) makes the pictures clicked by the rear camera seem a lot more endearing.

The vivo Xshot has plenty of camera-oriented features that make taking pictures and recording videos easier, faster, and more efficient when compared to a lot of other smartphones available in the market. The screenshot below depicts a number of camera options available to users. Another cool camera feature is that of enabling the watermark while clicking a picture. At the moment, it seems these watermarks are pre-defined but perhaps in a later release vivo should consider offering customizable watermarks. If and when that happens, users can simply add their copyright to an image right at the time of clicking the image. The Xshot can capture videos in resolution of 4K (3840*2160) which is an amazingly high definition and quality for a smartphone. Owing to the AF and AE Lock functionalities the video quality on the Xshot is at par, if not better than, professional recording.

The specs onboard the vivo Xshot are pretty good. The 5.2 inches IPS LCD display is a good screen size according to me. A decent battery of 2,600 mAh coupled with the Qualcomm MSM8974AA Snapdragon 801 chipset along with a 2.26 GHz quad-core processor makes the vivo Xshot a worthy opponent to competitors offering similar specifications. The phone comes with 2GB RAM and an internal memory of 16GB which is again a decent rig considering this is not vivo’s flagship product. The phone is powered by the Funtouch OS 1.2 which is based on the Android 4.3 Jelly Bean version making it a smooth performer. These are specs that I don’t mind carrying out in my pocket because being a techie on the go requires a lot of multi-tasking and I am glad the vivo Xshot didn’t disappoint me on that front. While the camera is its USP, there is certainly a lot more to the vivo Xshot than just the camera features. To top it all, the vivo Xshot supports 4G LTE – a must have requirement for heavy Internet users like me.

The build quality of the vivo Xshot is what I would call pretty good. It doesn’t have the HTC One M8 finish, but it does possess a pretty neat design and feels like a premium smartphone when you hold it.

As this review would suggest I am clearly impressed by the versatility that the vivo Xshot brings to the table and there is nothing that would stop me from recommending this little beauty to my friends, other than one very important thing – the price. For all its bells and whistles the vivo Xshot, as with most other vivo smartphones, is a little on the higher side when it comes to price. The phone is currently priced in the whopping Rs. 27,000 – Rs. 29,500 range. Considering the fact that there are competitors with similar and even better specs in the market which are priced much lower than the vivo Xshot I think vivo ought to rethink its pricing strategy, at least for the Indian market.

Very few people would actually consider the vivo Xshot, despite its feature richness, over the likes of the Xiaomi Mi4 and the OnePlus One. Those are some of the best performing phones in the market and are currently priced a good 5-10k less than the vivo Xshot. I wouldn’t mind buying this phone if it was in the Rs. 17,000- Rs. 20,000 range, but given its current price I think I would let this one pass until the competition forces them to lower their prices.

To sum it up, if you are looking to buy the vivo Xshot, here are some pros and cons to consider: