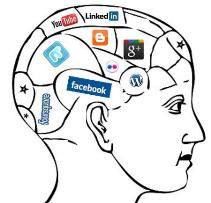 Whether it is business, interaction or knowledge sharing, social media has already become a trend among the people globally and the usage and addiction for Social networking sites is increasing. People spend a lot of time on social media to portray themselves to others and this trend is reducing the actual time spent by a person to meet some one personally.

Astonishingly 80% of the total posts on social media is only about the poster. It is like we are obsessed with ourselves. 35% of the 250 million photos that are uploaded daily, are tagged by the users themselves.

People with high level of narcissism or low self-esteem spent over an hour a day on Facebook. As people spend more time on Facebook, they start to believe that others have a better life than them.

Check out the interesting Infographic created by PsycologyDegree