Home Brief Is The Disappointing First Weekend Sales of iPhone 8 A Good Sign... 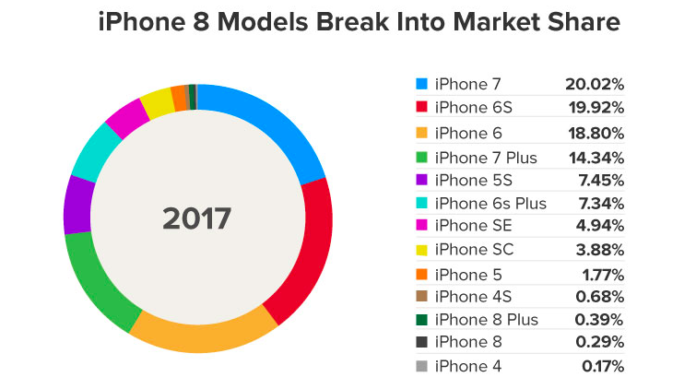 According to the latest data released by Localytics, during the first weekend sales, the iPhone 8 series devices have managed to grab just 0.7% of the iPhone market. Interestingly, people are finding more value in iPhone 8 Plus which accounted for 0.4% share compared to just 0.3% share by iPhone 8.

The not-so-encouraging market response to iPhone 8 series and iPhone X has a direct impact on the company’s market valuation. Since the day of iPhone 8, iPhone 8 Plus and iPhone X launched, the stock of Apple has tumbled down to US$150/share from $160 on September 12, 2017.

It’s too early to tag iPhone X with either of words ‘Hit‘ or ‘Miss‘ as the sales of iPhone X will kick off not before November 3. However, after the first weekend sales of iPhone 8 series devices, many believe that a sizable number of prospective buyers are holding themselves back waiting for iPhone X.

It’s no secret that growth in iPhone sales every year is primarily driven by existing iPhone users. The number of iPhone users who upgrade to the new iPhone every year is quite sizable compared to the ones who jump off Android ship. It is also interesting to learn that 92% iPhone users are expected to stick with iPhone while upgrading.

China and the US are the biggest markets for iPhone. While 45% of existing iPhone users in the US has no plans to go for an upgrade this year, little over one-fourth of iPhone users have shown their interest in upgrading to iPhone X, which was dubbed as iPhone 8 in the report.

But, not everything is going in the favour of iPhone X.

In the wake of encouraging response received by Samsung Galaxy S8+ and Galaxy Note 8, analysts are sceptical about the success of iPhone X. They are disappointed by the unnecessary hype created for the iPhone 8 series and iPhone X.

Besides, the strong sales of iPhone 7 in the last few quarters have also been a matter of concern for Apple. It’s quite unlikely that iPhone users who have upgraded quite recently will invest again in buying either iPhone 8 or iPhone X.

The lukewarm response received by iPhone 8 series indicates that users are either not ready to upgrade at all this year or are waiting for the iPhone X. It would be, however, interesting to see how many would actually go for iPhone X considering the exorbitant price of iPhone X. In either case, Apple may have a tough time in replicating the success of iPhones launched in the last few years.