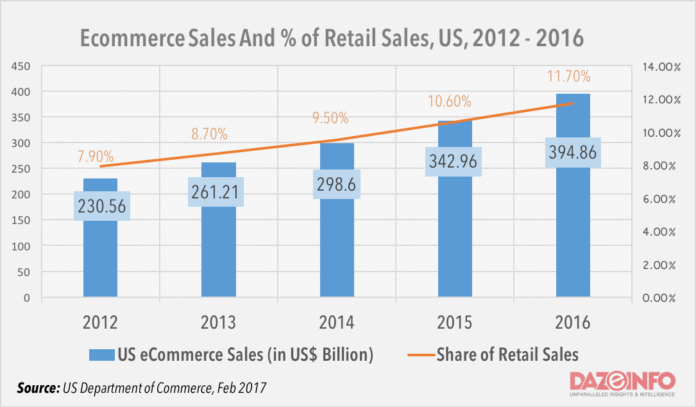 The U.S. Department of Commerce has recently released a report that highlights the flourishing e-commerce scenario in the U.S. According to the report, e-commerce industry in the US accounted for 11.7% of the total retail sales for the year 2016, grew 15.6% year over year.

The retail sales in the US also clocked the highest growth, 1.9%, in Q4 2016 during the whole year. Interestingly, the quarterly growth of e-commerce in the US remains disappointing.

Over the last three years, the retail e-commerce industry in the U.S. has been growing slowly, but steadily. The growth for 2016 has been recorded as the highest rate of growth since 2013 when online sales grew at about 16.5% over the year 2012.

Citing the Report by the U.S. Department of Commerce, the total retail sales for the year 2016 increased about 2.9% from the year 2015. However, these figures including the sales of products people don’t buy online, generally. Products like Fuel and Automobiles are sold and bought by people offline only, albeit the payment mode may be digital. Therefore to understand the exact contribution and growing scenario of e-commerce in the US, it’s recommended to fish out the sales of those products. Factoring those items out, as well as the sales in bars, the figure of total retail sales in the US in 2016 goes down to $3375 billion. In the wake of this new sales figure of retail sales, the share of e-commerce sales in the US swells to 11.7% from 8.1%.

The E-Commerce Scenario In the US

E-commerce has been a promising avenue for sales revenues in the U.S. since a decade now, characterised by constant growth. Retail e-commerce sales are anticipated to grow at a heightened pace in the foreseeable future, from US$396.7 billion in 2016 to about $684 billion by the year 2020.

Amazon, Wal-Mart, Apple, Staples, Macy’s, The Home Depot, and Best Buy of the top performing retail e-commerce companies in the U.S. Amazon.com Inc. continues to remain the e-commerce behemoth in the United States, with a bulk of e-commerce revenues coming its way. The total value of online transactions from U.S. consumers on Amazon.com reached $147 billion in the year 2016. In fact, this value is reportedly 31.3% higher than when compared to $112 billion for the year 2015.

Amazon’s 2016 growth was attributed to the growth in sales of electronics, home, and apparel categories. Electronics alone contributed an estimated 18% of the company’s total 2016 e-commerce sales. Other factors that play a contributing role in Amazon’s continued growth in sales is high customer loyalty and brand awareness.

Meanwhile, the second-largest e-commerce retailer in the U.S., Walmart, reported a growth of about 29% in e-commerce sales in the US for its fourth quarter 2016.

An interesting trend to make note of when looking at the U.S. e-commerce share of total retail sales by quarter is that Q4 makes up the largest slice of the annual sales each year. This annual quarterly increase in sales could be attributed to the holiday season, with Halloween, Black Friday, and Christmas sales taking up much of the quarter’s sales revenues.

The rising trend of mobile shopping is also a significant contributing factor to the steadily rising E-commerce sales in the US. In 2016, it has been estimated that about 136 million users have made at least one purchase via web browsers or mobile apps on their mobile devices. Further, the number of mobile buyers in the U.S. is projected to reach about 168.9 million by the year 2019.

Mobile sales alone reportedly accounted for about 29% of the total digital commerce spending. Further, the retail revenue from mobile in the U.S. is expected to rise from 115.9 billion USD in 2016, to 335.8 billion USD by the year 2020.

The U.S. e-commerce sales projections for the coming few years shows a steady growth rate. Online sales are projected to surpass 485 billion USD by the year 2021, with a sizeable portion of this revenue coming from apparel and accessory sales alone.

Setting the growing retail revenues from mobile purchases aside, consumer internet research and an increasingly affluent customer-base are factors that will positively affect online retail sales in the coming years.