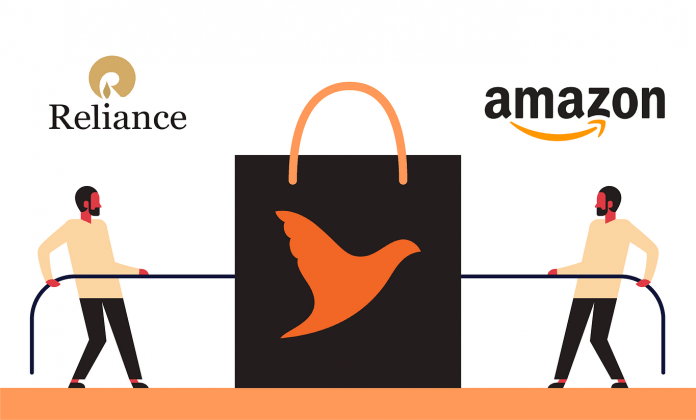 The Reliance-Future Group deal is in the soup once again! Amazon, which has long been determined to stop the fruition of the Future-Reliance deal, has inched a step closer to victory.

Today, the Supreme Court of India has issued notices on Amazon’s plea asking for interim relief against the order passed by the High Court on February 8th, which allowed the ₹24,713 crores RIL-Future deal to proceed. Along with that, the SC also restrained the NCLT from passing any further orders on the amalgamations.

But, the proceedings in the National Company Law Tribunal will, however, continue.

Led by Justice R.F Nariman, the bench issued notices to RIL and Future Retail, both of which were represented today in the court in the long-standing high-stake battle.

The Indian Supreme Court’s notices have placed both Reliance and Future Retail under a legal obligation to place their legal submissions with a time frame of 3 weeks from now.

Amazon, which acquired a 49% stake in Future Coupons – a Future Group company – for ₹1500 crores back in 2019, has been opposing the deal between Future Retail and RIL since October 2020 on the grounds that it was a gross violation of the agreed-upon terms between them and Future Group.

it’s been a roller coaster ride for both Amazon and Future Group so far. Some times it appeared that Future Group will have the last laugh, while some times Amazon emerges in a strong position.

After emerging victorious in the international arbitration in Singapore against the same, the Bezos-owned e-commerce behemoth went to the Delhi HC.

From the High Court, Amazon sought action against Biyani for violating their agreement which barred the latter from dealing with RIL or any other company regarding the sale of assets.

During the same time, Future also moved to the NCLT to execute the deal – the proceedings of which are currently underway.

Amazon’s proceedings in the High Court was initially leaning towards their favour when a single judge ordered the status quo on the deal. However, later on, a division bench happened to revoke the status quo, which allowed all regulatory and statutory proceedings for the RIL-Future deal to resume and progress.

Today, in the court, Justice Nariman initially mentioned the SC “understands what was going on” and wanted to halt the NCLT proceedings completely. But then, eventually went on to stay only the Tribunal from passing final orders regarding the deal.

Thus, in the current scenario, Amazon has moved two steps forward towards victory ahead of the Future Group. However, this, in no way, can help us determine if the e-commerce major will be declared the ultimate winner or Future Group will be allowed to proceed with their sale of assets to Reliance. It is also not know how long the legal proceedings will continue.

Besides this unending fight with Reliance and Future, take note that Amazon has more incoming trouble brewing at a near distance. With the recent surfacing of Amazon’s internal documents allegedly disclosing how they have been playing hooky with GOI’s rules, the e-commerce major has come under Enforcement Directorate’s (ED) scanner.

All said and done, it’s a bit too early to declare anyone a clear winner as the situation has been turning upside down after every hearing. Future existence of Future Group is solely relying on this deal. We shall keep you posted as and new development take place.