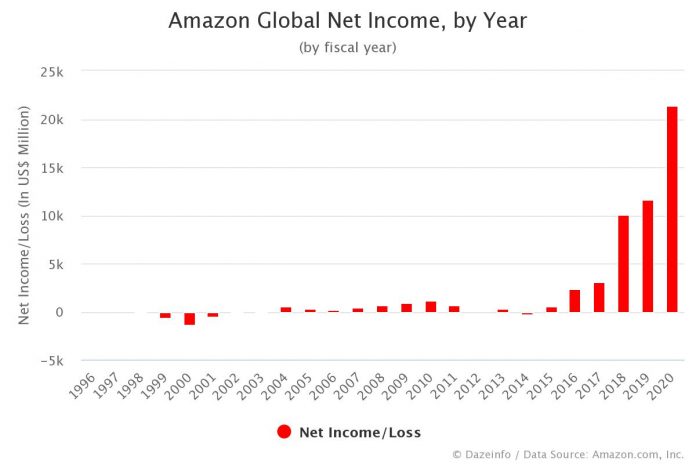 The above graph represents Amazon net income by year, starting from fiscal 1996 to 2020. The Washington based company reported its highest-ever annual net profit of $21,331 million in 2020, with an astonishing 84.1% YoY growth. Over 33.9% of that generated during the three months ended December 31, 2020.

As the graph shows, the global net loss of Amzon.com, Inc. had consistently increased from fiscal 1996 to 2000. In fact, in 2000, the company reported its highest-ever net loss of $1,411 million. However, the company’s investor finally took a sigh of relief in 2003 when the company reported its first profitable year, with a net income of $35 million. Surprisingly, after one year, the net profit of Amazon increased an astonishing 1580% in 2014, to $588 million.

Interestingly, the year 2010 was the first time when Amazon’s net income crossed the $1 billion mark. However, after that, it had started declining until 2016 when the company once again achieved another milestone of hitting the $2 billion mark in its net income.