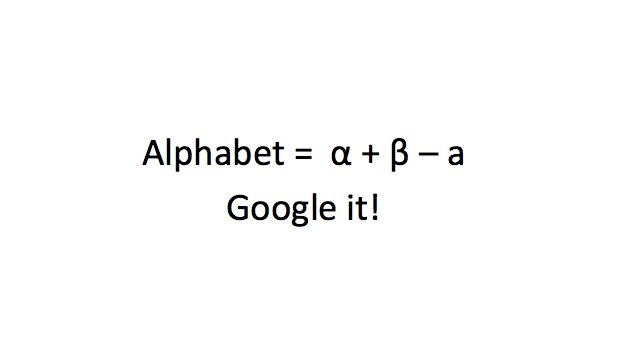 Google Inc. (NASDAQ:GOOGL) has recently gone through the a major restructuring. As per the new arrangement, Google would be a part of Alphabet, a new holding company that will own Google and other products that are under the umbrella of Google for now. After the news that broke out yesterday, the internet is flooded with viewpoints, assumptions and theories decoding Larry’s sudden and surprising move. However, after going through tens of such commentaries justifying the move, I chuckled at the so-called evolutionary transformation of the founders of Google. Here is why.

When the duo created Google – it was a manifestation of their commonly held beliefs  on what is interesting and important –  equations, numbers  and engineering as shown below.  That is what gave them the distinct edge then and is understandable. There is a story that their first check was written for Google instead of Googol and thus, Google was born.

Today, they have announced the second company and when I heard the name- Alphabet – the building block of spoken communication, life has come a full circle for them in their 40’s.

On the choice of name, this is what Larry had to say,”We liked the name Alphabet because it means a collection of letters that represent language, one of humanity’s most important innovations, and is the core of how we index with Google search! “

The page rank algorithm’s building blocks are really words, but Microsoft had a monopoly on the word- word. So, they went to the essence which is still geeky with greek roots.

Steve Jobs, the think different guru, came back as a wiser man in his second innings at Apple. If Alphabet is their (Larry and Sergey) second innings, it bodes well behaviorally that they chose the symbol of language and communication. From people intelligence to people relationship –  true evolution from the dizzy days of the 1990s.

For a pair who take pride in being unconventional, they chose an obtuse name when they started.  Now, when they have all the cash in their hands and branding could be a breeze for them, they could have been more creative (#BeCreative) yet they chose a very common word from the dictionary. It is unconventional in that sense as well. I would like to add, it is also brilliant in the long term. Here are my thoughts.

When General Electric transformed into GE, people still asked what GE stood for and usually followed it with – what is an electric company doing in health insurance or call centers?  GE’s campaign- “imagination at work” was my answer.

Alphabets existed way before our times and will likely exist beyond and it is safe to say they are relevant to majority of things in life including the building blocks of our DNA naming convention – built with alphabets, not words.

A company flush with cash and daring – insurance and investments (venture capital to private equity and beyond) are options. These can fit in within the alphabet umbrella long term.

Why do I think it is all possible? The way they crafted the different class of shares and ownership when they went public makes it possible. Read about it here. These guys are brilliantly smart and/or have excellent advisors. Either way, kudos to them for having the guts to listen and charter unknown waters.

3. People Side of Things

What happens when you are not ready to retire from your own company, but the guy you want to retain is possibly interested in your job. One unconventional way is to create a boundary that did not exist before, especially if you have been toying with the idea.

Great ideas need great people, not necessarily the other way round.

The duo had their candidate to run Google as we know it, Larry has been working with Sundar Pichai directly from last October. It is time to transition to create win–wins.

Overall, it is uncharted waters for Larry and Sergey. My instinct is that they will have the last laugh. Innovation especially the disruptive kind needs new energy – it could start with the name.  Time will the judge.

Disclaimer: The article is originally written by Karthik Rajan and was first published on LinkedIn.