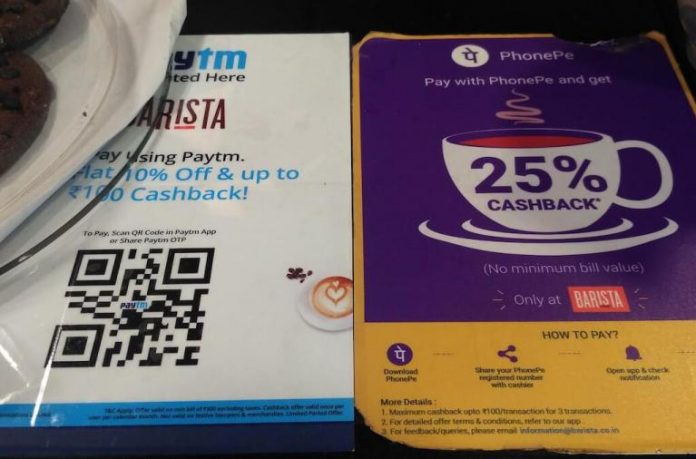 It has recently been reported that Paytm and PhonePe which are leading digital payment companies of India have combined allocated a humongous sum of Rs. 2000 crores to spend on marketing in the year 2020. The top executives at both the companies have implied that the marketing budget is going to be used for increasing their individual companies’ awareness and credibility as well as be used for promotion of their respective products to a wider consumer.

Paytm has set aside 1200 crores for their marketing budget whereas Phonepe has planned to spend 800 crores during 2020.

PhonePe has partnered up with this year’s IPL season as an official co-presenting sponsor, a move which is being interpreted as an effort of these new fintech services trying to permeate throughout smaller towns and villages to tap new users as well as onboard new merchants. As more and more people from digitally low aware areas of our country are beginning to make payments via these platforms, it would make sense to establish credibility with this audience.

“For us, a strong brand recall on trust, integrity, and innovation is important as our focus is to get at least 150 million new users through the year,” PhonePe founder and chief executive said Sameer Nigam said.

Nigam also said that the Walmart-backed company has plans to double its active user base this year in 2020 which currently stands at 75 million monthly active users and about 200 million registered customers as of today.

A Paytm spokesperson told to ET that their branding and marketing campaigns are kept fairly simple so that it would be relatable and resonate with their merchants and users be it in an urban setting or that of small tier-III and rural Indian towns. Paytm was also awarded title sponsorship rights for the Indian cricket board’s international and domestic seasons till 2023 last year.

Several significant celebrities are also being roped into the marketing campaigns of these companies. These decisions are mostly made backed by data to decide whether a particular celebrity has a positive consumer value recall and are trusted for the products that they endorse regardless of any fan following. Amir Khan and Alia Bhatt were roped in as brand ambassadors for PhonePe whereas the BharatPe UPI digital payments app was endorsed by Salman Khan last year.

India, for quite some time, has been reckoned to be an emerging financial superpower. With swiftly growing internet and mobile services, India is currently on the cusp of something big. The emergence of digital payments on a never-before-seen scale. Moreover, with government-backed initiatives such as Digital India, the spread of digital payments will be catalysed at an even faster pace.

Paytm has been making very big strides to ensure that they are leading the digital payments revolution in India by introducing more and more consumer-centric features to make sure that users stick to their app for their payments need of all kinds. They are also concentrating on merchants by making sure that it is an easy and hassle-free experience on their end to process payments through the app. Paytm has also recently launched an all-in-one POS for merchants to ensure the same. In an exclusive interview with Team Dazeinfo, Vijay Shekhar Sharma, the CEO of Paytm happened to mention that they expect to onboard 10 million new merchants this year in 2020.

PhonePe, similarly, with their plans to grow aggressively to 150 million new users this year is acing on the forefront of digital payments game in India. According to them, they have crossed 5 billion Transactions whilst growing 5 times in a year in 2019.