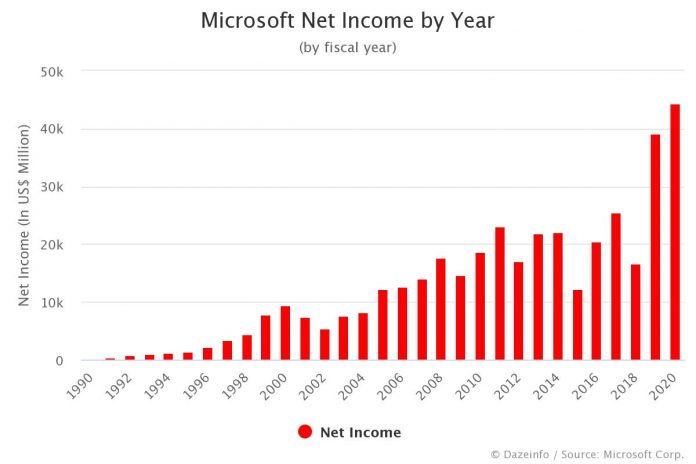 The above graph represents Microsoft net income by year, starting from fiscal 1990 to 2021. The annual net profit of Microsoft reached an all-time high of $44,281 million during the fiscal year ended June 30, 2020. That’s an impressive 12.8% YoY growth. Over 25.3% of that company generated in the fourth quarter alone.

It was the first time in fiscal 2005 when the net income of Microsoft crossed $10 billion mark. The company recorded a whopping 50% YoY increase in its net income, amounting to $12,254 million ($12.3 billion). Over 30% of that or $3,700 million to be specific, the company generated in the fourth quarter.

Microsoft net income in fiscal 2019 increased a whopping 136.8% YoY to $39,240 million. The company’s FY19 total net income includes a $2.6 billion net income tax benefit related to intangible property transfers and a $157 million net charge related to the enactment of the Tax Cuts and Jobs Act (“TCJA”), which together increased net income and diluted earnings per share (“EPS”) by $2.4 billion and $0.31, respectively.