The speculations on the performance of Apple iPhone X has been only amplified by the critics and the media probes. Analysts and some financial circles have repeatedly downgraded Apple’s latest flagship for being more expensive, which has led to its sales drop. Apple Inc. (NASDAQ:AAPL) didn’t seem to escape from the prying and was quietly waiting for its end user to give the approval nod.

The design and feature of Apple iPhone X were equally audacious than its previous models as its price, and who’d tell this better than its users or more accurately, whose opinion would matter the most?

Apple has been bullish about providing better user experience and hence iPhones are touted as offering the best customer satisfaction than every other player in the smartphone arena. A new study suggests that a majority of iPhone X owners are more than happy with the device’s performance.

Ben Bajarin, a Principal Analyst at Creative Strategies, wrote a column in Tech.pinions disclosing the results of a survey on Customer Satisfaction. The survey comprises of feedback from 1,746 iPhone X users. The study focuses on the early adopters. The respondents in the study gave the iPhone X an overall 97% customer satisfaction. Impressive yet, 85% of the owners said they were ‘very satisfied’ with the product. 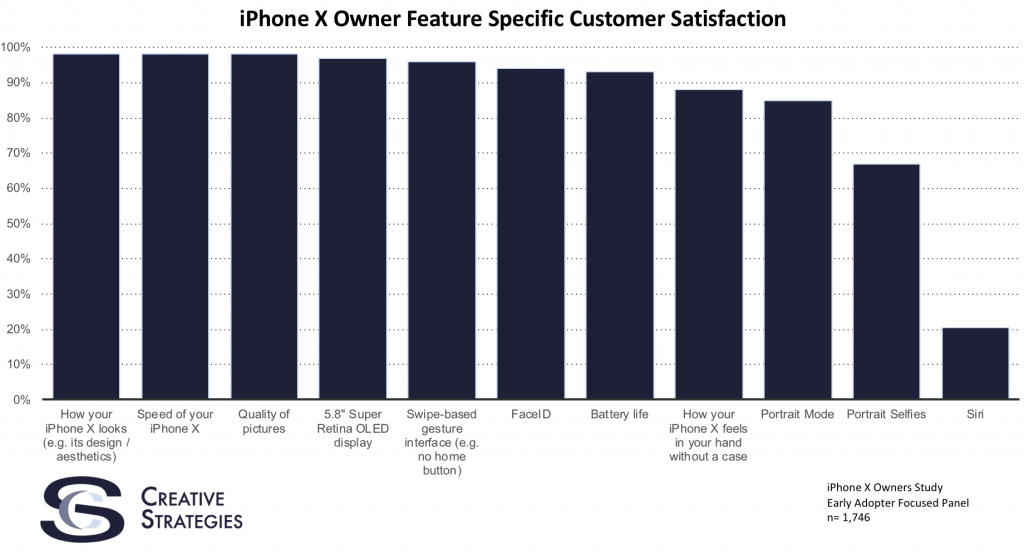 On Apple’s last fiscal Q1 earnings call, Tim Cook reported that the customer satisfaction for iPhone X would be 99%. That number is kind of justified given the impeccable sales figure of iPhone X reported in Q4 2017. iPhone X sales expected to tank significantly in the following quarter as more buyers were opting for the older iPhones. Apple has not yet announced its latest earnings report, but it is estimated that older models accounted for 50% of iPhone sales in Q1 2018. The demand for iPhone 8 continues to surge and interestingly Apple recently launched a Red iPhone 8.

News and rumours about the next-gen iPhone X continue to mount endlessly. It is believed that Apple will release three new devices this year and one is a cheaper yet bigger version of iPhone X. Mixed reaction among the customers in terms of sales of iPhone X has reflected a change of tactics. Apple may be forced to rethink its pricing policies and work more intensely on its technology in future.

Other flagship devices from major manufacturers also don’t really compromise with customer satisfaction, but due to a few, and some known, reasons iPhone users take pride in using Apple. The likes of Galaxy S9 and whatnot are always looking for the better screen, better specs, better technology altogether and they probably might find it in some other Android, but the iPhone fanboy will just wait for the next Apple.

At least we know now, that a handful lot of iPhone X users are really happy to use it. It’s definitely not the users for sure who are criticizing the iPhone X, then who is? Maybe an iPhone X’s doppelganger!