Home Brief Facebook Has Paid $5 Million As Bug Bounty: Indians Claimed The Most... 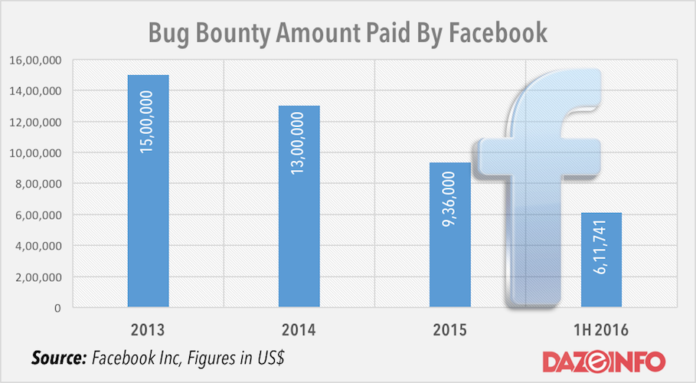 Facebook Inc. (NASDAQ:FB) celebrated its fifth anniversary of Bug Bounty Program this year. Facebook knows human errors are inevitable. And it has its own unique ways to deal with such errors!

Five years back, the social media giant introduced the Bug Bounty Program. This program gave Facebook users a chance to identify the glitches and solve them. Since then, Bounty hunters around the world have found total 900 researchers in the system and claimed $5 million from Facebook.

While indulging in the fifth year bash of the bounty program, Facebook has also revealed some jaw-dropping figures in a bid to encourage bounty hunters across the world to join the program. Facebook calls them ‘Researchers’!

A simple calculation shows that Facebook, on an average, paid $5,500 to 900 researchers who successfully became eligible for a bounty. Some of them, however, earned much more.

In the first half of 2016 alone, Facebook paid $611,741 to 149 researchers who found a legitimate bug in the system. Bounty hunters filed around 9,000 reports between January to June 2016. Indian researchers have claimed the largest share of total bounty paid this year, followed by USA and Mexico.

To make the bug bounty program more lucrative, Facebook has added WhatApp into the program as well. Going forward, researchers will also be awarded for any glitches they find in WhatsApp. Facebook has also eased out the payment option for researchers by adding more payment options like Bitcoin. To make the payment process faster, the company has also introduced Automated Payment Process, which will help researchers to receive payments much earlier than expected.

While Facebook has to cough up a handsome amount of money to researchers who find various bugs in the system, the program is helping the company to make the social media platform more secure, robust and error free. Consequently, in the last few years the number of bugs have gone down, so is the bounty paid.

Simultaneously, the bounty program is also helping Facebook to employee few of the best young resources. With jobs offers and a handsome pay under its bug bounty program, Facebook is attracting some of the best talents from the market.

Arun Sureshkumar, a developer from India, has recently pocketed $16,000 for uncovering a major bug in Facebook. Suresh informed Facebook about the vulnerability in Facebook Business Manager. This flaw allowed anyone to control or delete any page on Facebook!

Similarly, in March this year, another developer working in India’s largest eCommerce site Flipkart, also claimed a bounty of $15,000 by exposing another flaw in Facebook. Anand Prakash, 22 years old engineer, discovered a bug that could grant access to messages, photos and credit/debit card details without users’ permission.

Facebook never ceases to marvel its users. And what better way than giving users a chance to find and fix a flaw, and get rewarded generously!