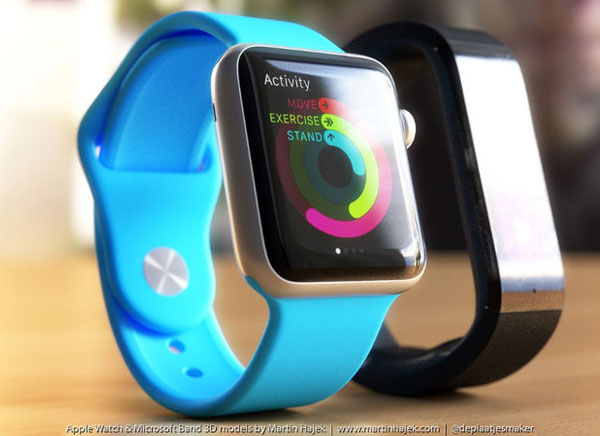 All smartwatches occupy a grey area of technology. It isnít always clear when a smartwatch is a watch, a fitness tracker or something more akin to a smartphone. It is what has necessitated the need for terms like wearable devices. Whatever the correct terminology, Microsoft Corporation (NASDAQ:MSFT) recently released the Microsoft Band; it’s contender in the smartwatch market.

Microsoft has recently undergone a huge transformation in a bid to reinvent the brand visually. Arguably a latecomer to the game, the Microsoft Band has spent three years in development. Built to compliment the cloud-based platform Microsoft Health, the Microsoft Band is a comprehensive health database designed to go beyond simply counting your footsteps to potentially warning users about their risk of developing cancer and other diseases.

So what is the Microsoft Band? The Microsoft Band does look like a fitness tracker, and definitely performs many of the same functions. Even the name “Band removes this product from being labelled a watch if only to stall comparisons between the Apple Watch. But it also performs a whole host of other features that make it worthy of measuring it against the Apple Watch.

Firstly, letís talk about the price. The Apple Watch costs anywhere between $549 and $1,099. By contrast, the Microsoft Band costs a fixed $199. This price difference is representative of the broader trend between Apple Inc. (NASDAQ:AAPL) and Microsoft products. Does the difference in price represent a difference in their physical quality? Itís too early to tell.

So what are you getting for your money? There ís no denying that the Microsoft Band isn’t going to be the latest fashion statement. It has been described as only a smartwatch only a mother could love. The thick black rubber strap is not the most tactile material for the wrist and is even vaguely reminiscent of a prison tag. By contrast, the Apple Watch is a bona fide luxury wristwatch and looks every inch the part. Beyond this, the Apple Watch is also highly customizable, leaving the aesthetic of the Microsoft Band severely lacking.

The Band has limited smartwatch functionalities, which Microsoft claims it will add to in the future, but it does perform the essential features that users rely on. Notifications, reading emails, and replying to texts with pre-defined answers are all a part of the Band’s makeup, as is receiving calls. But the app-based experience isn’t as heavy as it is in the Apple Watch, or even other Android smartwatches, which may disappoint owners.

However it’s the details of the Band, such as the optical heart rate sensor, 3-axis accelerometer, gyrometer, GPS, ambient light sensor, skin temperature sensor, UV sensor, capacitive sensor, and galvanic skin response sensor that put it not just ahead of the Apple Watch, but also its competitors in the fitness market. Plus it works with pretty much any mobile device, including iOS devices, which could make it a much more reasonable investment than an Apple Watch.

By contrast, the Apple Watch is somewhat lacking in the fitness department despite a lengthy campaign featuring model Christy Turlington Burns, promoting the watch as the perfect fitness accessory. The retina screen is, however, better equipped to display a whole host of entertainment apps that perform a variety of fun and informative functions that are more centered on user enjoyment and convenience than personal health.

That said, in spite of the ongoing debate amongst sellers of haute horology like Chrono24 as to whether smartwatches are disruptive technologies, there is limited functionality to any smartwatch. The Apple Watch can do amazing things if you have the patience for such a small screen. Plus, a steady finger and a focused eye also come with a steep learning curve. By contrast, the Microsoft Band is more self-assured as a fitness device with the essential smartphone compatibilities.

In conclusion, the Microsoft Band definitely weighs up against its Apple counterpart. Although itís not beautiful, it’s definitely a robust and practical piece of equipment that serves its purpose – something the Apple Watch is struggling to prove. Unfortunately, the quality of the Band is unlikely to challenge the Apple Watch – though few smartwatches can. But, considering the world was watching their every move in the months building up, that shouldn’t come as much of a surprise.