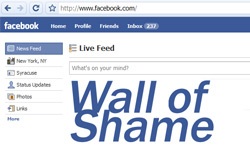 In past few weeks Facebook has made several changes in its websites, which is constant getting ugly response from many of the uses and in turn had proved to be worse for social media titan social image. These new changes have created a deep state of anger and frustration in million users. They are getting annoyed and have started leaving Facebook.

Below Infographic “Facebook Wall of Shame” was created by WordStream Inc. – provider of search marketing software and services – to enlighten the mistakes which company has committed till now. Recently company has launched its App called “Facebook for iPad”, which critics thinks “too little, too late.”

Have a look at the Infographic and let us know which one according to you is acceptable.