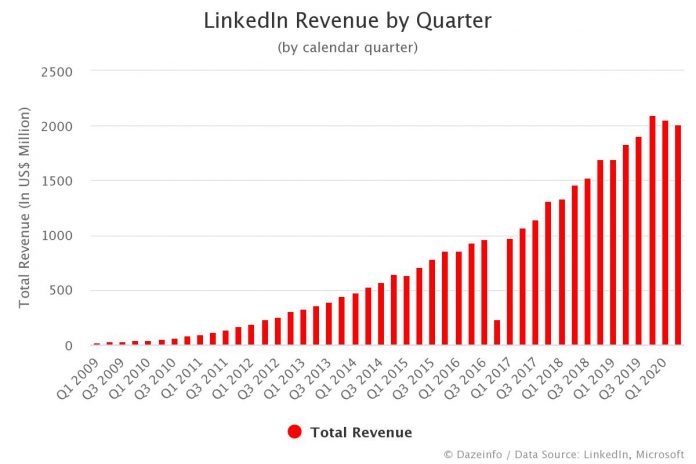 The above graph represents the LinkedIn revenue by quarter, starting from CY Q1 2009 to Q2 2020. On December 8, 2016, Microsoft completed the acquisition of LinkedIn, the world’s largest professional network on the Internet, for a preliminary total purchase price of $27 billion. LinkedIn quarterly revenue increased an impressive 24.2% YoY in Q4 2019 to a record-high $2,102 million.

In the June quarter ended in 2017, the quarterly revenue of LinkedIn crossed $1,067 million for the first time, with an impressive 9.3% QoQ growth.

What began in co-founder Reid Hoffman’s living room in 2002 is now the world’s largest professional network with more than 610 million users in more than 200 countries and territories worldwide and is known as LinkedIn. The company was officially launched on May 5, 2003.

LinkedIn IPO was the biggest Internet IPO since Google debuted in 2004. In May 2011, LinkedIn priced its initial public offering (IPO) at $45 a share. Shares of LinkedIn rose as much as 171% on their first day of trade on the New York Stock Exchange and by the time market closed, the stock has soared 109% to $94.25. As a result, at the end of the day, LinkedIn was worth $8.9 billion.

In June 2016, Microsoft announced the acquisition of LinkedIn for $26.2 billion. It is important to note that it is the largest acquisition made by Microsoft to date.