The telco battle continues to wage in India. Every other operator is trying to outplay Mukesh Ambani-led Reliance Jio. The raging data and price wars have led to shrinking profits and growth for the incumbent operators. While Bharti Airtel, Idea Cellular and Vodafone India continue to feel the wrath of Reliance Jio, Mukesh Ambani is apparently in no mood to relax the grip on the market and may continue to offer more discount on tariffs.

Apparently, Jio’s aggressive pricing strategy won’t be slackened in the near future, which could induce stress on its rivals. It may lead the other operators to increase tariffs which could result in loss of market share. According to analysts at JP Morgan, Jio believes that “it can be profitable in the current tariff environment and continue to invest” and this can be distressing for other operators.

Reliance won’t let falling tariffs and short-term ARPU dips come in the way of Jio’s plight. The company is focusing on market expansion and it is unlikely that it will move from its pricing aggression to maximize customer acquisition. Analysts say this could mean more pressure for the rival carrier operators in FY 2019. All in all, its actually the Reliance Jio effect – during the 4G revolution, the entry of Jio has provocatively forced other operators to cut down their tariffs and match Jio’s highly competitive prices which have resulted in losses and falling ARPU. The other carriers are readily closing the gap with Jio in terms of their data plans.

On the other hand, Sunil Mittal-led Bharti Airtel reported its first loss in 15 years in India. Airtel was hit by a Rs 652 crore net loss in the past quarter. Revenue dropped 13% with ARPU at Rs 116, its lowest ever. Idea reported a lower than expected Rs 930.6 crore in net losses in March-quarter resulting in its sixth straight loss.

Not everything is going in the favour of Reliance Jio. Its Average Revenue Per User (ARPU) – a key performance metric – has fallen about 11% from Rs 154 in the December-quarter to Rs 137.1 in March-quarter. Yet, ARPU for Jio is highest than its rivals. Certainly, tariff reduction in the past months has hit the ARPU but added up to the subscriber base. The subscriber base count has increased to 186.6 million, with a net addition of 26.5 million during the quarter. In the previous quarter, it had a subscriber base of around 160 million. 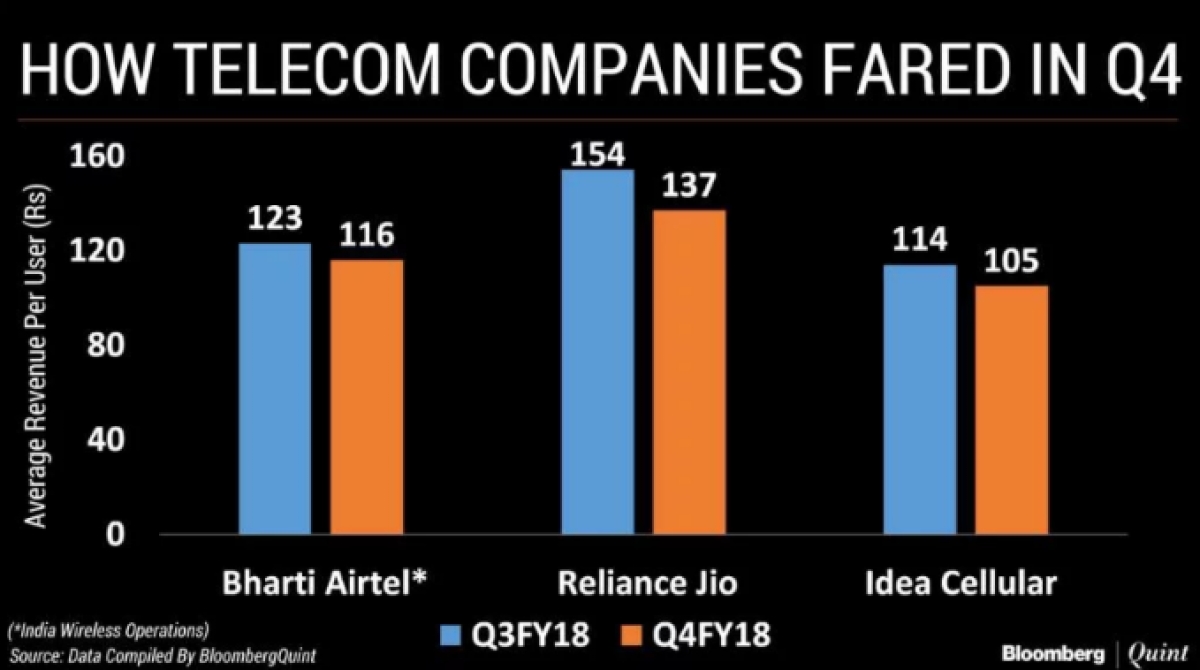 The Idea-Vodafone merger didn’t prove much fruitful as they were unable to take down Reliance Jio. Jio and Airtel will certainly poach customers of emerging Idea-Vodafone combined entity, according to Bank Of America-Merrill Lynch. Brokerage Nomura International expects the subscriber addition pace of Jio will remain robust, given that “nearly three of every four new incremental 4G LTE phone buyers opt for Jio’s service and the pace of Jio Phone additions remains strong too.” RJio is bullish about its Jio Phone and it expects to add 8 million subscribers per month.

Jio’s prominence is soon expected to dominate fibre broadband and enterprise business front as its strong data network has the potential to overshadow the rivals.

The Jaw-Dropping JioFiber Postpaid Plans Will Give Competitors Run For Their Money!