The Apple App Store and the Google Play are the two key digital marketplaces for any aspiring mobile app developers. With nearly 98.9% new smartphones, sold in Q1 2017, running either Android or iOS, it is clear that together they comprise the overwhelming majority of the mobile ecosystem. Ideally, developers would want to publish their app on both storefronts, but what if you have to make a choice? Should you prefer the Apple App Store or the Google Play Store?

The latest data from Sensor Tower sheds some light on this conundrum. According to their Store Intelligence data, more app publishers are reporting their first $1 million annual in-app revenue figures on Apple’s platform than on Google’s in the US.

What this means that Apple’s App Store is still the king of in-app monetization. This is especially impressive when we consider the relatively larger size of Google’s ecosystem. Not only does Android have a much larger market share, but it also has the larger storefront.

The App Store has a total of 2.2 million apps available for download, while the Play Store has 2.8 million as of March 2017. This is due to Apple’s high market share in elite markets such as the US, where users spend much more on apps. The majority of Apple’s device portfolio also falls in the premium smartphone segment. Users buying these devices have much more spending power which can translate into higher app revenues. In fact, in the US, the average iPhone user spent around $40 on apps in 2016, $5 more than in 2015.

Games Are Raking In The Big Bucks 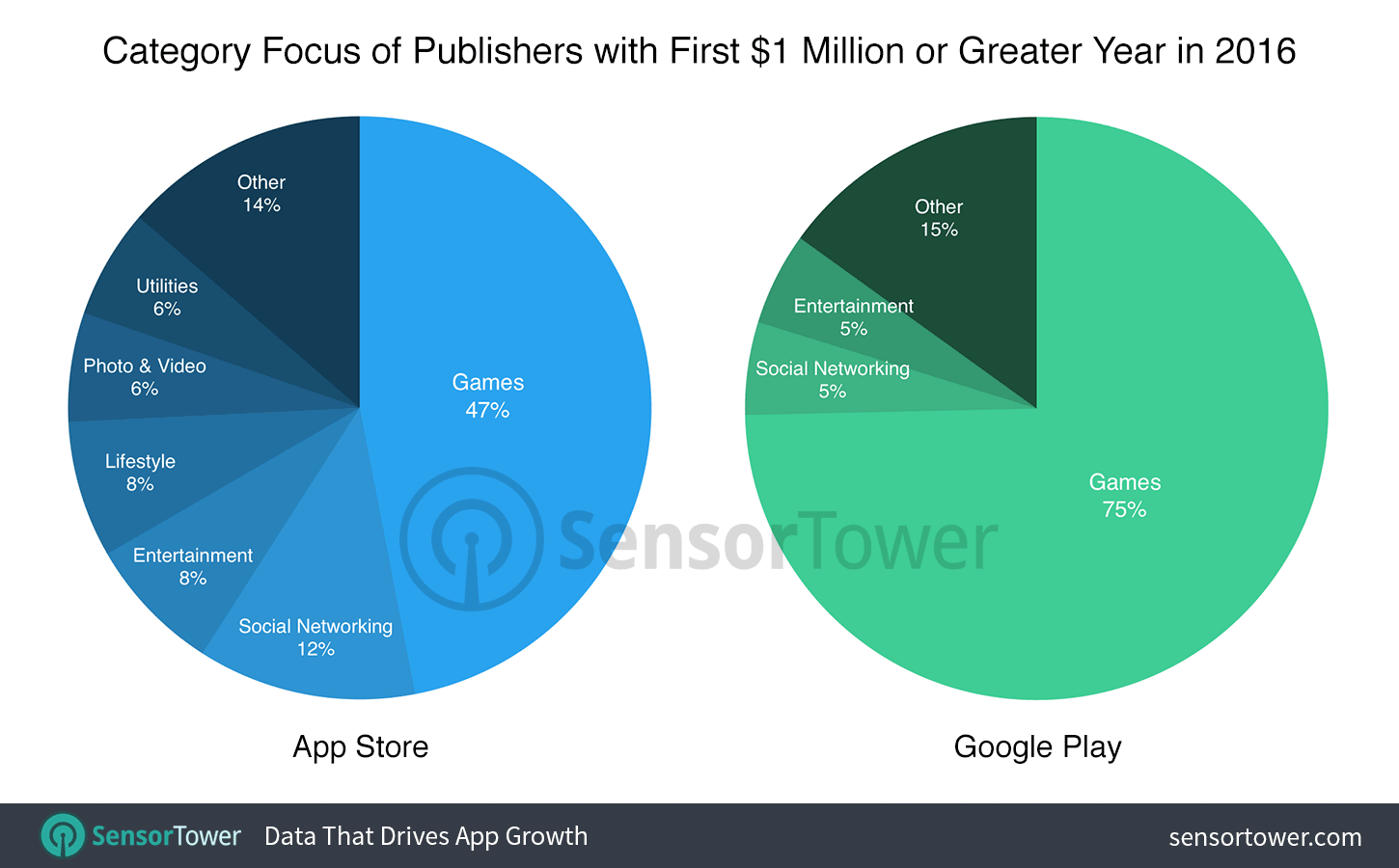 A while back we reported on the steady decline in gaming app usage for the second year in a row. However, this does not seem to have affected their profitability one bit. In fact, in 2016, nearly 47% of million-dollar publishers on the App Store were focused on games. This is the most out of any category by far, with Social Networking at a distant second at 12%.

The Entertainment category also registered an impressive growth of 130% YoY with average user spend of $2.30 in 2016. Netflix primarily fueled this impressive growth. They reported more than $58 million in in-app revenue from the App Store in Q4 2016, compared to a small $7.9 million in Q4 2015.

While average user spends is relatively spread out on the App Store, the story is entirely different with the Play Store. On Google’s Play Store, Games made up nearly 75% of first time million-dollar publishers. Social Networking and Entertainment were the only two other categories that had an appreciable share of million-dollar publishers at 5% each. This highlights the lack of in-app monetization opportunities for non-gaming publishers on Google’s platform.

The Play Store Is Catching Up

Despite Apple’s dominance over app monetization at present, the situation could change quite soon. The Play Store’s growth in the number of million-dollar publishers has been much higher. It had 39 million-dollar publishers in 2016, a near 178.6% improvement over 2015 when they had a mere 14. In contrast, the number of publishers who had their first $1 million or greater year on the US App Store in 2016 nearly doubled (94.1%) over 2015. If Google Play can maintain this momentum, it may surpass the App Store in the coming years.

App Annie has also predicted that the Android’s app revenue for 2017 will top the App Store’s ($41 billion vs. $40 billion), pointing towards a trend of increased spending on Android. The story also changes if we consider app ad revenue, which is where Google’s ecosystem benefits from its much larger user-base.