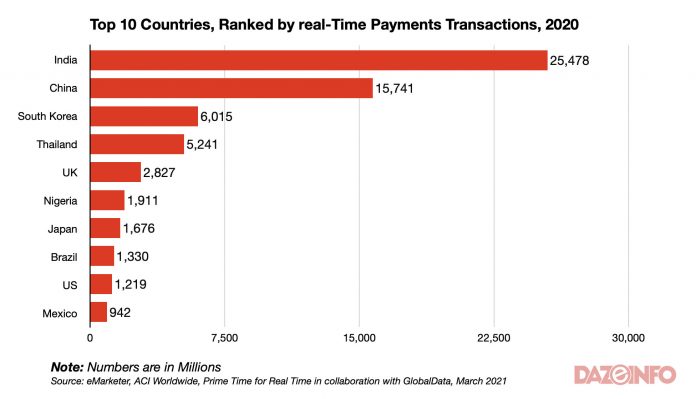 Real-time payments are fast gaining momentum when it comes to popularity!

According to e-marketer, in 2020, RTP payment methods were widely used all across Asia-Pacific, with the biggest volume of transactions being observed in India, China, South Korea and Thailand.

What are real-time payments? It refers to payment rails (platforms that process transactions) with some key characteristics.

First, as the name suggests, real-time payments, aka RTPs, process transactions in real-time or at least in the least possible time frame. RTPs initiate, clear and settle payments within a matter of few seconds!

Second, real-time payment networks are ideally up 24×7 and 365 days. This basically means they are always online and available to users for transferring funds. Third, RTPs are ‘open-loop’, meaning they are connected directly to a personal account and do not rely on prepaid balance.

Some current examples of RTP networks include the RTP® Network from U.S-based The Clearing House (TCH), UPI or United Payments Interface in India, Faster Payments in the United Kingdom and PIX in Brazil.

When it comes to real-time payments rails, terms such as ‘instant payments’, ‘immediate payments’ and ‘fast payments’ are interchangeably used to refer to them.

As per the report by Emarketer, India processed 25.48 billion RTP based transactions in 2020, which is 10 billion more than China and the highest among all other countries. This is all due to the exploded adoption of the National Payments Corporation of India, aka NPCI led Unified Payments (UPI).

The Unified Payments Interface has become one of the fastest-growing payment platforms in India. It has drawn the attention of global policy-makers as well. Now, it is regarded as an important institutional and public policy innovation.

In 2020, users crowned UPI as the most preferred mode of payment, followed by debit cards, IMPS (Immediate Payment Services) and credit cards, as per a report by Wordline India (WI).

In 2021, the number of UPI transactions is estimated to touch new heights as in the first four months – January 2021 to April 2021 – itself it has reached nearly 10 billion.

Currently, as of April 2021, 220 banks are live on the Indian real-time payments rail.

After India, China is leading the boom of RTP adoption and usage, accounting for 15,741 million transactions last year.

China’s RTP network is called Internet Banking Payment System or IBPS. But because of the prevalence of digital wallets, RTPs are not the most preferred way of transacting in the country. However, at the same time, it is growing rapidly.

All in all, it is well understood that the future will see more wide-scale adoption of real-time payment platforms, and it will be one of the major driving forces in the global digital payments ecosystem. We will keep you updated on all future developments. Until then, stay tuned.