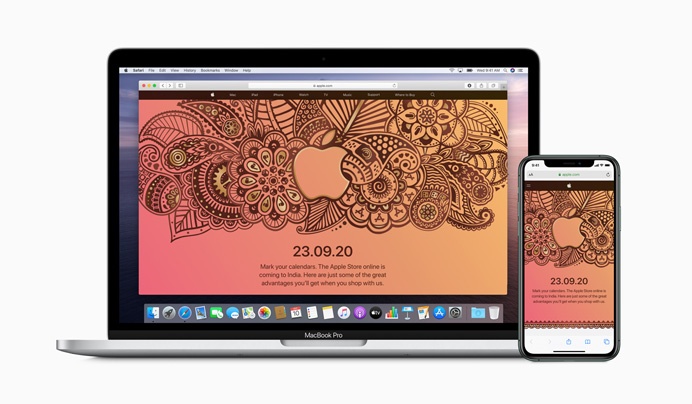 After all rumours, speculations, debates and discussions online, as well as offline, Apple store in India is finally becoming a reality now. The world’s most valuable publicly-traded tech company is all set to have its direct presence in India with the first online store.

From September 23, 2020, the fanboys of Apple products in India would be able to shop many Apple products directly. The company would be unveiling its first online store in India on the aforementioned date to offer the premium experience to users that the company has been offering through its offline stores in the US.

Until now all the Apple products are being sold in India via third-party authorised retail stores as the company doesn’t have its own retail stores. With Apple online store the company would be taking orders directly and would offer full range of products to customers.

Customer configured products, online Apple Specialists, and direct trade-in programs are some of the much-needed offerings by Apple that Indian shoppers always wanted to have.

Special discounts for students and AppleCare+ are some of the other offerings that shoppers in India can now enjoy with the launch of online store of Apple in India.

Tim Cook, CEO – Apple Inc (NASDAQ:AAPL), confirmed the development and said that he is excited about the launch of Apple’s first online store in India.

Apple Store In India: Eyes on iPhone and Mac Price

As soon as Tim Cook announced the launch of Apple’s online store in India, the Twitterati jumped with the excitement in the anticipation of better price strategy of Apple’s products in India.

For long the exorbitant prices of Apple products have been making a big hole in the pockets of buyers. Apple products are nearly 30% – 40% costlier in India than the US and many other markets. Besides the local taxation, margin for authorised retail partners in India is not allowing Apple to have any cushion to play with price in an order to deep penetrate the India market. Just to put things in context, Apple iPhone 11 Pro, which is price tagged with $999 in the US, is available for $1,365 in India. Similarly MacBook Pro and MacBook Air, are the other products that are in high demand in India but received lukewarm response from the market due to its pricing.

With Apple’s owned and controlled online store in India, it’s expected that Apple’s would be revisiting its pricing strategy to strengthen its presence in one of the fastest-growing mobile and tech industries in the world. India, which is known and driven by the price sensitivity, has been a difficult nut to crack for Apple so far. The sales of iPhone and MacBook in India has not been exciting enough so far for Apple.

With its direct presence and India specific pricing strategy in place, Apple could easily leverage on the aspiration of millions of users who have been fascinating about owning an Apple device for long.

Eyes on the upcoming festival season in India, Apple’s decision to launch its first online store in India is being seen as a great move. Netizens are also expecting some great discounts from Apple and wish that the iPhone maker could do something to offer their products on par with US prices.

“In October, customers can expect free online Today at Apple sessions led by local Creative Pros, focused on photography and music. Just in time for the festive season, signature gift wrap and personalised engraving will be available for select products,” Apple said.

Apple online store in India could just be the first step of the company to make strong inroads into the India market. The fast-changing equations between the US and China have already bought India to a focus point of many companies, and Apple is expectation.

Given the sensitive buying nature of shoppers in India, it would be interesting to see how Apple plays the ball to eat into the market of its arch-rival Samsung, and OnePlus as well. We can expect a lot many actions from Apple in the days to come.