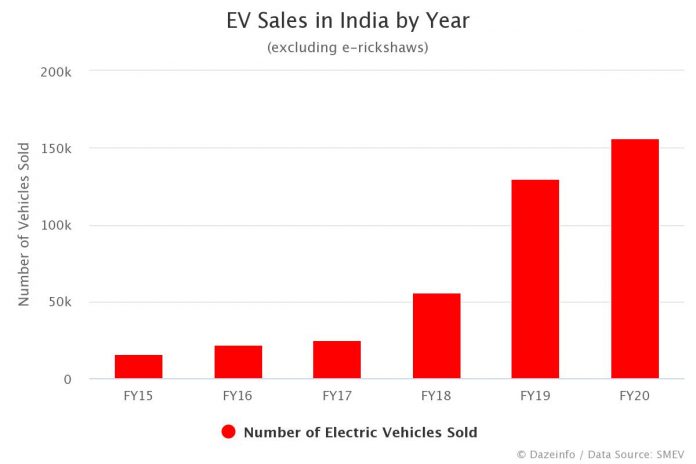 The above graph represents the total EV sales in India by year, starting from fiscal 2015 to 2020. The electric vehicles sales, excluding e-rickshaws, in India grew an impressive 20% YoY, from 130,000 in FY19 to 156,000 in FY20. The growth was primarily driven by the sales of two wheeler electric vehicles.

As the graph shows, since FY15, the EV industry in India has been witnessing a significant yearly growth in its vehicle sales. In FY16, the number of electric vehicles sold in India reached 22,000 units, with an appreciable 37.5% YoY growth. Out of those, about 20,000 units were two wheelers.

Interestingly, in just two years, the EV sales in India spiked 124% YoY in FY18, totalling 56,000 units. The growth largely came from the sales of two wheelers such as electric scooters, motorcycles in India.

It is important to note that the fiscal 2019 was the first time when India’s electric vehicle industry sold more than 1 lakh units in just one year. About 130,000 units of electric vehicles were sold in the country, representing a strong 132.1% YoY growth.