Home Brief Spam Calls in India: The Increasing Number Is Quite Concerning! 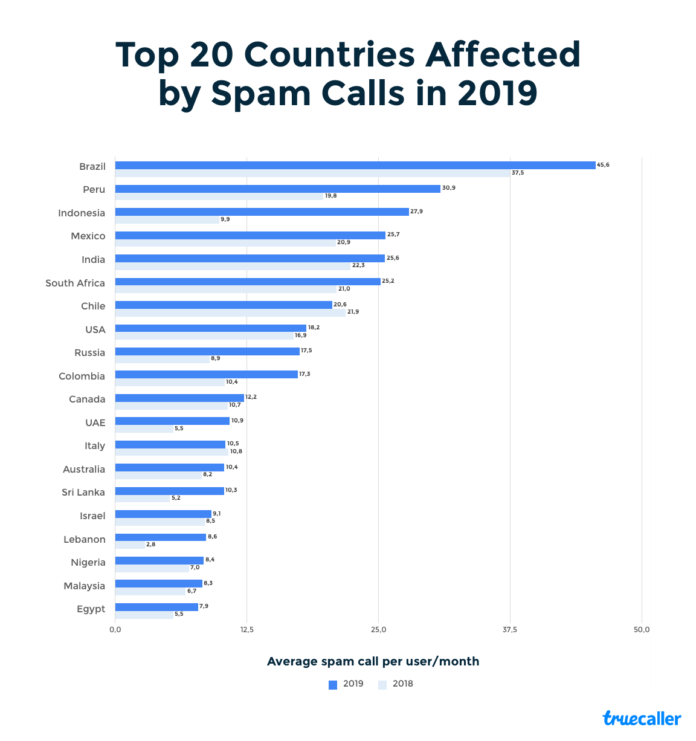 The ongoing price war between telecom players in India has helped millions of mobile phone users who managed to cut their monthly career billing to half. On the flip side, this has also resulted in a higher number of spam calls that are not just annoying but also productive killers.

According to the latest data compiled by TrueCaller, the number of spam calls in India increased by 15% in 2019 in spite of the fact that India dropped down in the list of Top countries by the number of Spam calls.

The automation combined with unlimited free calls tariffs offered by the operators is the main reasons behind the constantly increasing number of Spam calls in India. The automated call dialling facility integrated with CRM systems which eventually plays recorded messages has drastically reduced the cost of marketing and support system. As a result, an increasing number of companies are turning towards automated call system for the aggressive promotion of their products and services as well as sending various unwanted reminders to their customers.

Apathy is, in a bid to attract customers, companies have become too aggressive with such systems to a level of leaving customers annoyed nowadays. Most of the companies use multiple numbers to call leaving the mobile phone users completely clueless about the unsolicited calls and callers.

So, who are the main culprits behind the highly annoying Spam calls in India?

Just to things in perspective, there are nearly 1.17 billion mobile subscribers in India and 100 million of those have truecaller app installed on their devices.

Telemarketing companies have emerged as the second-largest spammers in India by accounting 17% of total spam calls recorded in 2019. But what’s the more surprising is the entry of fintech category in the list of top spammers in India.

The growth of fintech sector has led to an increasing number of spam calls in India. As more number of unicorns, like Paytm, PhonePe, along with many small startups have joined the traditional BFSI players by offering various financial services, mobile phone users are prone to receive a number of followup, reminders and marketing calls from these companies.

In 2019, financial services companies were responsible for 10% of total spam calls recorded in India.

Companies are actively employing more targeted strategies to offer personalised services to people in India. As number of people are nowadays connected with smartphones and the internet, companies are able to garner more personal data to map their offerings.

It’s time when authorities need to step up against the spam calls and list down more strict guidelines related to spam calls and callers. Until then mobile phone users are left with no other options but to deal manually – at their device level.

Truecallers is definitely becoming an inevitable tool to fight with spam calls for users. By the methods of curation and aggregation, Truecallers notifies its users about the possible spam calls beforehand itself. The above findings are derived from the 116 billion calls attended by truecaller app between January and October 2019.