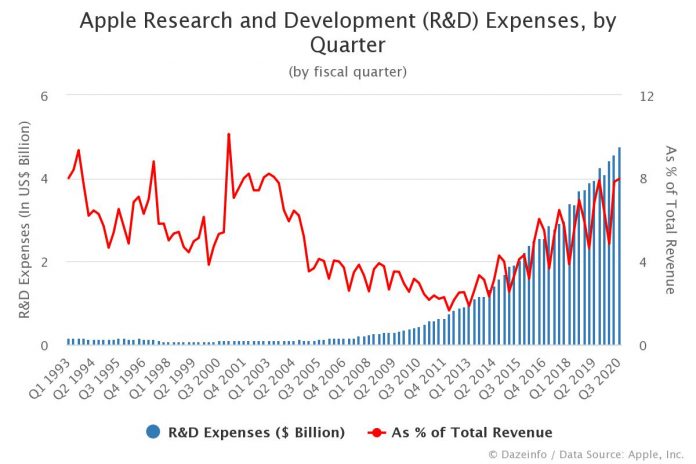 The above graph represents Apple Research and Development expenses by quarter, and the percentage of Apple’s total revenue spent on R&D activities during the quarter. Apple R&D spending constantly increasing with each passing year. Apple R&D expenses in fiscal Q3 2020 increased an appreciable 11.8% YoY to a record-high of $4,758 million ($4.8 billion). On a quarterly basis, the company recorded a 4.2% QoQ increase in its R&D expense.

One must note that in fiscal Q1 2001 when Apple spent over 10% of its total revenue i.e $102 million on R&D – the highest-ever percentage of revenue spent on R&D.

Interestingly, fiscal Q1 2013 was the first time when Apple’s R&D expenditure crossed the $1-billion mark in history. The total expenditures for research and development increased from $906 million in FY Q4 2012 to $1,010 million in FY Q1 2013, representing over 33% YoY growth.