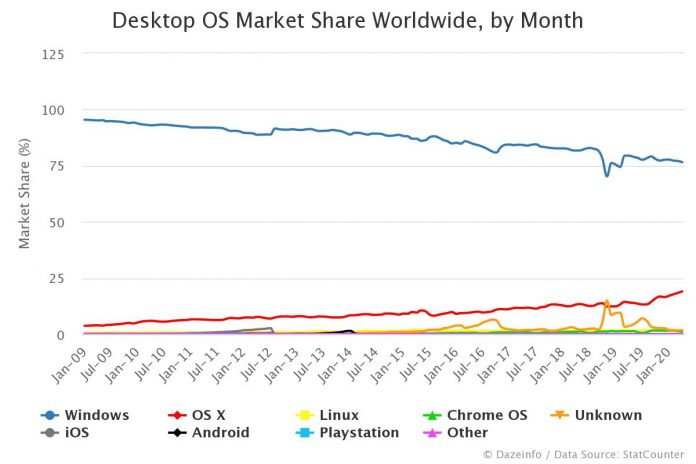 The above graph represents the monthly distribution of the desktop OS market share worldwide, starting from January 2009 to the recently completed month. Interestingly, the world’s top 3 desktop operating systems Windows, Mac OS X and Linux dominate the 97.12% of the market, leaving other OSs to compete for the remaining 2.88% of the market.

Microsoft’s Windows OS continues to dominate the desktop OS market worldwide since its launch in 1995. Globally, approximately 76.52% of all desktops/laptops run Windows operating system as of April 2020. However, the usage share of Windows OS declined nearly 2.93 percent point when compared to April 2019.

Apple’s Mac OS X is the world’s second widely used desktop operating system, despite being used only on Mac devices. The market share of OS X increased an appreciable 4.94 percent point, from 14.05% in April 2019 to 18.99% in April 2020.

An operating system (OS), in its most general sense, is a program that manages hardware and allows a user to run other programs on a computing device.

While the research in the field of Operating System started in 1950, the first major breakthrough came only in 1962 when the first recognisable modern Operating System was built. Atlas Supervisor was the first program that successfully managed hardware to provide a controlled environment to various programs.

Desktop Market is completely controlled by Windows OS created by Microsoft. In the last 3 decades, Microsoft introduced various versions of Windows OS, latest being Windows 10 OS. While almost every other company work on Windows OS, Apple has got its own Mac OS.

In the mobile space, Google’s Android is the undisputed king due to the strong app ecosystem and availability to other smartphone manufacturers. Unlike Android, Apple has decided to keep its own operating system for mobile devices, named as iOS, restricted only for devices made by the company itself.