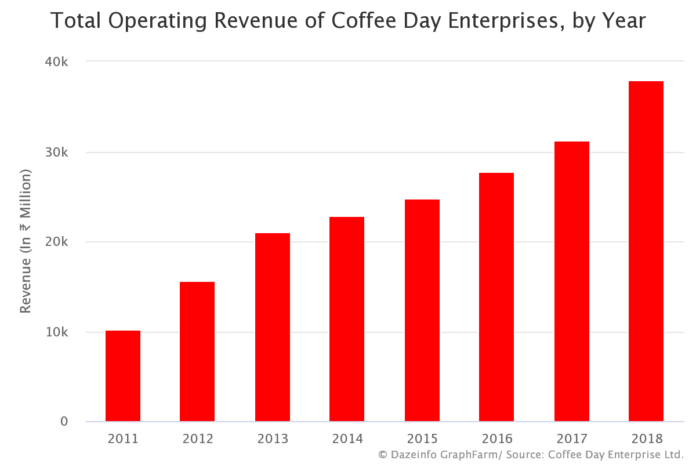 The above graph represents the total operating revenue of Coffee Day Enterprises by year. In the fiscal year ended 31 March 2018, the company recorded an impressive 21.4% year-over-year increase in its consolidated operating revenue, beginning in Rs 37,879.75 million. Interestingly, a majority of that came from the sales of food, beverages and other items.

The company’s revenue from operations include the sales of Products (coffee beans, food, beverages and other items, merchandise items and traded goods), sales of services, income from financial services and other operating revenue.

Later, on January 21, 2015, the name of the company was changed to Coffee Day Enterprises Limited. The company raised Rs 1,150 crore through initial public offerings (IPO) launched in October 2015. The IPO got over-subscribed 1.81 times at price band of Rs 316-328 a share.

Coffee Day Enterprises Limited operates the coffee business through its subsidiary – Coffee Day Global Limited (Incorporated in 1993) – and its subsidiaries.

The company is well known for its flagship brand name ‘Cafe Coffee Day’ (CCD). The first Café Coffee Day (CCD) outlet opened on July 11, 1996, at Brigade Road in Bengaluru, India. Today, CCD is the largest retail café chain in India, with 1,722 café outlets in 245 cities across the country.