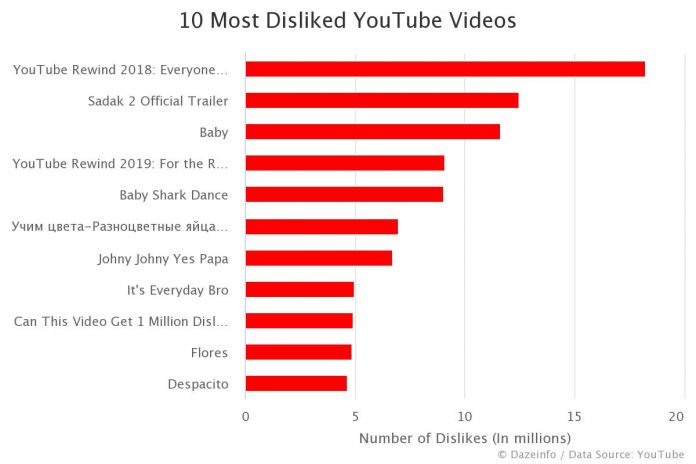 The above graph represents the top 10 most disliked YouTube videos as of 2020. With 18.27 million dislikes, the YouTube Rewind 2018 is the most disliked video on YouTube, since it’s upload on December 6, 2018.

Uploaded on 12 Aug 2020, Sadak 2 official trailer becomes the world’s second most disliked video on YouTube and the most disliked video in India. The primarily reason behind this video getting hate from viewers is the suicide of Sushant Singh Rajput, amid nepotism and favouritism in Bollywood, India.

Uploaded on February 19, 2010, Justin Bieber’s “Baby” is now the third most disliked video on YouTube. As of August 2020, over 11.66 million people have clicked on the ‘Dislike’ button on YouTube.

“YouTube Rewind 2019: For the Record” emerged as the 4th most disliked videos on YouTube, with a total of 9.12 million dislikes.

Surprisingly, “Despacito by Luis Fonsi ft. Daddy Yankee” video got 4.67 million dislikes, despite being the most liked video on Youtube (over 39.4 million likes) since it is uploaded on January 12, 2017.

The Like and Dislike buttons on YouTube are tools for gauging the popularity of a particular video. They point out towards the level of engagement on it.

On 23 April 2005, the “Me at the zoo” was the very first video uploaded on YouTube by one of the co-founders Jawed Karim. Interestingly, only after 18 months of its launch, in October 2006 to be precise, Google bought YouTube for $1.65 billion. The company now operates as one of Google’s subsidiaries.

Today, YouTube is localised in over 100 countries and can be accessed in 80 different languages.

Currently, YouTube has over 2 billion monthly active users – that’s almost one-third of all people on the Internet. However, over 1 billion hours of videos are being watched on Youtube every day, which helps to generate billions of views. Over 30 million daily visitors make YouTube one of the fastest growing video sharing platforms, which is constantly being challenged by another internet behemoth, Facebook.