Why Is Apple Removing Thousands of Apps From the App Store?

The cleansing efforts reflect how Apple wants to deliver uncompromised security to its users. As 9to5Mac notes, Apple has explained that if any app breaches sections 5.1.1 and 5.1.2 of company’s App Store Guidelines, which says that apps cannot transmit “user location data to third parties without explicit consent from the user [or] for unapproved purposes“, will be taken down. Apple informed the developers via e-mail that “upon re-evaluation”, their apps don’t fall in compliance with company’s guidelines. Also, the developers must remove any code, framework, or SDK that are related to the violations before their apps can be resubmitted to the App Store. 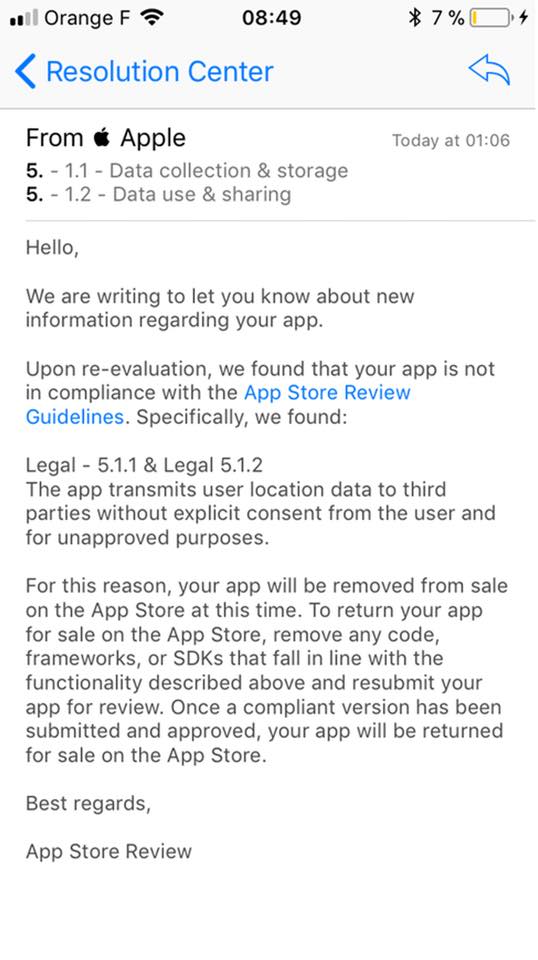 Th recent clampdown has come amid the growing industry shift due to General Data Protection Regulation (GDPR), which comes into effect on May 25th in European Union. With new rules, tech companies need to have clear consent from the users before collecting their data.

iPhones have already enjoyed an extra edge over other smartphones for being more secure. Apple has clearly given the developers what can be said as a shakedown, to justify what the data is being used for and how it is shared. Furthermore, the company is also reacting to the instances where the data is being used for purposes unrelated to improving the user experience. Now iOS will get an added advantage over Android as the users of the latter don’t have this option. The Google Play Store has a plethora of apps that ask for location details, and the users don’t even have a clue what their data is being used for. If Google also does the same thing with Android, the apps on the Play Store will become more secure, and Android might probably become less vulnerable.

Over the last few days, Apple has been cracking down a lot of apps that didn’t comply with company’s App Store Guidelines. The developments come after Apple informed the developers to build apps which provide iPhone X support, and use only iOS 11 SDK. The company also mentioned that any broken or outdated apps will be de-listed from the App Store. Perhaps, these improvements were more than required considering the recent troubles related to the iOS 11 upgrades that iPhone owners have been facing.

By taking a strong stand against the sharing of location data, the iEmpire has exhibited the true “responsibility in technology“. With the incumbent concerns regarding privacy and utilization of users’ data, the tech firms are under immense pressure to protect user information from being misused. The scenario was quite different before the Cambridge Analytica revelations when user data from 87 million Facebook profiles were harvested to manipulate elections.

The tech giants worldwide are increasingly recognizing the sense of responsibility about their products and services, and apparently, Apple seems to be the first volunteer to provide complete protection to the user. Apple has been long known as a privacy-focused company, and it wants to ensure that the developers are also careful with users’ data in the same way. No wonder users across the world trust Apple more than Google and Facebook when it comes to safeguarding their personal data.