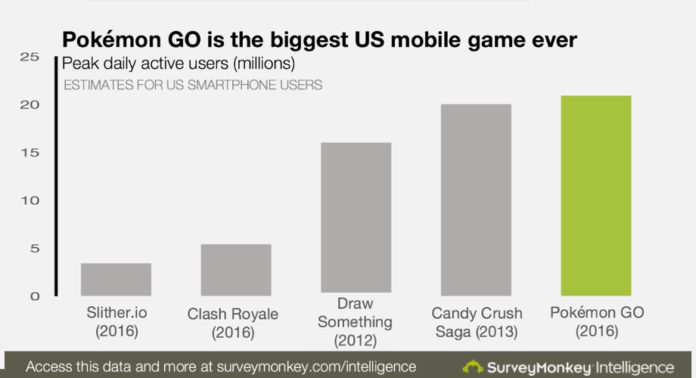 Augmented Reality means some serious business and this fact has been immensely proven by the overnight success of Pokemon Go game. Survey Monkey, the survey tool company, has revealed that within 5 days of the release Pokémon Go shattered all the records of other blockbuster mobile games to become the best mobile game in the US history. The futuristic game managed to entice a whopping 21 million daily active users in the US alone.

The game is on a spree shattering records over records. In a span of just 3 days after its launch, Pokémon Go managed to surpass Twitter’s user base closing the gap with Snapchat. The report also reveals that at such a skyrocketing adoption rate, the game could also surpass the total number of Google map users as well. A survey by SensorTower highlights the engagement levels of Pokémon Go users which are more than the engagements levels of Social media behemoth Facebook as well.

The mobile Gaming is a whopping $36.9 billion market. Nintendo’s Pokémon Go is on a dream run and is proving to be the run-of-the-mill money machine as the game has helped the company to add $7.5 billion in its market valuation within few days of its launch. The shares of the company soared to its peak after 1983, recording a 24.52% surge on Monday.

Surprised? Well no! As within hours of its launch in the US, New Zealand and Australia, the Pokémon game climbed to the top of the download list and is running on 5% of all Android smartphones in the US. However, the company has decided to opt for slow rollout in other countries because of heavy loads due to excessive downloads and high engagement that is causing troubles to maintain its servers. Despite, the company is leaving no stone unturned to meet the demand from other countries, the game is launched in UK and Germany recently. Interestingly, the company is yet to introduce the Pokemon Go from the world’s biggest Smartphone India and China.

Nintendo is not the sole owner of the game, as the app is developed by Niantic, a startup acquired by Alphabet Inc, and shares a considerable 30% of the revenue from Pokémon Company. The In-App purchases are the major source of revenue for the tech giants as the app is free to download.

Pokemon Go is not the first game that has attracted such a massive attention from mobile phone users. In the past, many games likes of Nintendo’s own Miitomo game, managed to accumulate such hype but failed to keep the engagement level of users intact.

The game was officially released in the US, Australia and New Zealand in its first phase but the hype surrounding the captivating futuristic game was raised to a level that many users in other countries downloaded fake app files which in turn infected their smartphones. The potential malware was so strong that they took control of the device in many cases.

People belonging to every age group are crazy for the game. A considerable 40% of all the game users are 25 years or older. All is not well

‘Gonna catch em all’ doesn’t end up well for some of the Pokémon Go players. The game involves catching a virtual Pokémon in real life locations, sometimes there are rare Pokémon’s that evade if you aren’t able to catch them on time. This has led to some serious incidents and car crashes recently, with a number of users posting on Twitter that they may have died because of playing the game.

In another incident, while catching the Pokémon two men fell off the cliff but none were injured. In New York, a teen was robbed by three attackers while he was searching for his Pokémon. Robbers are also making use of the game to rob victims. Besides all, a number of car crashes have also been reported where drivers were engaged with Pokemon Go while driving the car.Curing Obesity?

The fun of playing Pokemon Go is not limited only to catching virtual Pokemon; Twitter is full of tweets claiming that Pokémon Go is helping a number of users to cure obesity. But how? The game involves players to search for virtual cute Pokémons in the real locations and sometimes within a stipulated time. Thus, in order to cater their greed and need for more and more Pokémons the users travel miles.

Companies worldwide are trying to leverage upon the enormous buzz created by the Pokemon game. Recently, T-Mobile company decided to gift its Pokémon Go’s customers a free data subscription for one whole year to play the game, a master stroke by the company as T-mobile’s user base doubled.

The unprecedented growth of Pokémon Go game is a signal that the future belongs to augmented reality. A number of firms including Google, Apple and Samsung are working on AR (Augmented Reality). A number of enchanting projects are in a research stage, Microsoft’s HoloLens will bring the windows experience to the real world while Google’s Project Tango is a device that tracks 3D motions of the device and creates a 3D model environment around. The AR market is slated to be worth $120 billion by 2020.