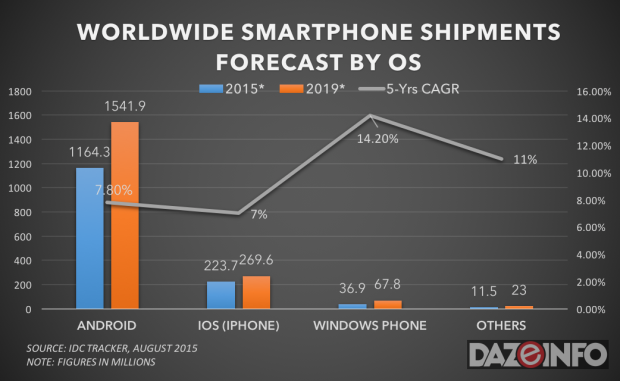 The smartphone revolution is well and truly upon us. Over the last few years, there has been a huge shift in how we consume media and other internet based services. As smartphone penetration has increased, we have seen a growing trend where people have been using their smartphones as their primary facilitator for web searches as well as media content. While the short-term growth looks rosy with Q2 in 2015 posting an 11.6% growth in smartphone shipments, we take a look at what the future holds for the smartphone market. According to the latest IDC report, Worldwide Smartphone Shipments between 2015 and 2019 is estimated to grow at 7.9% CAGR.

The Prediction For the Next 4 Years

The most recent predictions coming in from the IDC (International Data Corporation), which has estimated the smartphone shipments YoY growth for this calendar year to be at 10.4%, a whole 0.9% point down from their previous estimates. The research firm expects this slump in the growth spur to manifest itself over the next 4 years as slower growth rates peg estimated global smartphone shipments at 1.9 billion units in 2019. Compared to the fact that shipments of smartphones is expected to reach 1.44 billion units by the end of 2015 itself, this potential figure suggests that established markets have reached saturation points.

If we look at some earlier findings in the same vein, this Wired article published in 2014 cites a report from Ericsson where they predicted 5.9 billion smartphone users in the next 5 years. And, now the big question is, will the revised prediction and slow growth in smartphone shipments will make the number fall short of the prediction?

So what changed in just over a year in the smartphone scenario that has led to a reevaluation of these numbers? Let’s dig deeper to find out.

#1. India Expected to Take the Helm from China

As of now, China is the world’s largest smartphone market, accounting for nearly 30% of the global smartphone shipments quarter over quarter. In 2015, the shipment of smartphones is expected to grow by 1.9% YoY, which is way too down from 19.7% in 2014. Despite, China still remains the largest consumer by volume for the entirety of the forecast period, albeit its yearly smartphone shipment market share is expected to drop from 32.3% in 2015 to 23.1% by 2019.

In sharp contrast, India is expected to rise to 651 million smartphone users by that time. The expected CAGR of the Indian smartphone market is predicted to be a steady 8.7%.

In light of the recent report, Ryan Reith, Program Director with IDC’s Worldwide Quarterly Mobile Phone Tracker has been quoted as saying,”India has captured a lot of the attention that China previously received and it’s now the market with the most potential upside. The interesting thing to watch will be the possibility of manufacturing moving from China and Vietnam over to India.”

#2 The Rise of the Low Budget Smartphone

With the market in the US and China both reaching a saturation point, we find that the focus has now shifted to the developing markets likes of India. As is with most developing nations, the smartphone market in India is very sensitive to the price point. Hence, we can see in future forecasts that the sub-$200 price category has claimed the majority stake in the worldwide smartphone shipments. In 1H 2015, nearly 49% of smartphones sold in India belong to sub-$150 and 71% belong to sub-$200 category. What does this mean for the major smartphone OEMs?

Since the next saga of the smartphone wars seems destined to be fought in budget markets with rock bottom prices and meager profits, Android is expected to continue its dominance. The global yearly shipments of Android-powered smartphones is estimated to go up from 1.16 billion in 2015 to 1.54 billion in 2019, a CAGR of 7.8%.

That does not mean Apple is entirely out of the game either. In fact, Apple may try to regain more of the market share by re-launching low-priced models of their iPhones, although they still might not be able to achieve the price point of the rival Android OEMs. Nevertheless, Apple’s strategy of going for a premium experience is actually expected to work out quite well for them with iPhone shipments expected to grow from 223 million to 269.6 million in 2019, a CAGR of 7%. On the flip side, Apple’s smartphone shipments market share is estimated to go down from 15.6% in 2015 to 14.2% in 2019, while Android’s remain constant.

Despite all the efforts and new strategies, Windows Phone and the other mobile OS’s are not expected to make any significant dent in the market share pie in this forecast period. Together, Windows Phone and other OS will account for only 4.8% of total smartphone shipments in 2019.

#4 The Phablet Juggernaut Goes On

The large screen craze that seems to have caught the smartphone consumers at large is expected to continue, with phablets (5.5-inch to 7-inch screen) leading the way in smartphone sales. Following an 84% growth in the sales of phablets in 2015 (as compared to 2014), devices with 5.5-inch to 6-inch screens are estimated to constitute 71% of the shipments by 2019.  As this is expected to be the screen size of flagship devices across all mobile platforms, it’s also expected that the phablet category will end up with the highest average selling price among other devices in this forecast period,

This latest report from IDC has revealed some very interesting statistics. However, it hasn’t been entirely out of the blue as we’ve seen this gradual shift to India as a primary market over the last few quarters. Companies, nowadays, are ready to make an investment in manufacturing India-focused smartphones and few devices are being introduced in India before other countries. The Asus Zenfone 2 was launched in India before the US and global launch of Xiaomi’s MIUI V7 was hosted in New Delhi just a few days back. This trend which seems to have already begun will gain more momentum over the next few years as India looks to present itself as the top contender in the smartphone consumer market rather than being an afterthought. The country of 1.2 billion people wants to go online and looks like a cheap smartphone is their preferred choice!