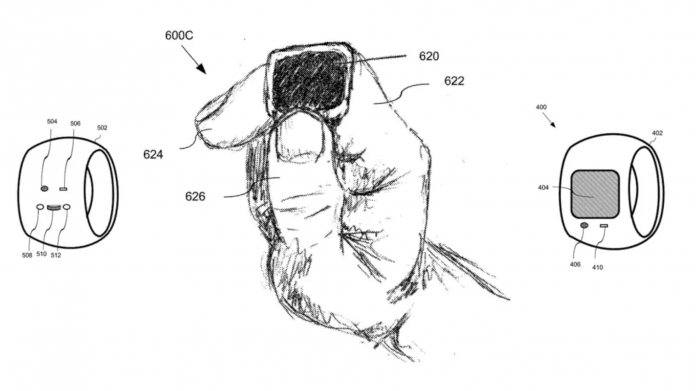 People have imagined getting cool electronic rings every time they see a James Bond movie. However, it seems that these Scifi rings are no more a part of some fiction movie.

Apple is supposedly working on a smart ring that could function and executive things just by gestures. A new patent has surfaced in regards to the supposed upcoming Apple Smart Ring (not officially named though). According to the patent, the ring would allow its user to control other devices by just pointing your ring-wearing finger towards them.

The patent was first surfaced in October last year though. Now, some more information and a new patent in relation to the same bring more lights to its possible functionality of the smart ring Apple is working on.

The concept of smart rings is not new to the world. Companies claim to be developing them for over a decade. A Smart ring is a connected-ring with some form of tech fitted inside. It contains various sensors to collect data of our heartbeat, pulses, and the number of steps we walked in a day, etc.

We already know that Apple Smart ring would have a touchscreen, connectivity to Siri and biometric sensors from a previous patent that surfaced around in late 2019. However, the new patent suggests that users will be able to interface with any device by using pre-defined gesture control. They have to gesture towards the device using their ring-wearing finger to control the device wirelessly.

The patent lists various activities a user can perform with the ring. Controlling volume on an Apple TV or change the temperature or brightness of lights are some of them. This suggests that the ring would not only be able to control Apple devices but corrected home appliances as well. Therefore, it fits perfectly somewhere between a health device and smart home devices.

According to the patent, the wearable device could also use the touchscreen, voice control or even a physical dial to interface with other devices. All the commands would be transmitted from the ring to the other device using NFC (near field communications). These features suggest that the ring would act as a new miniature Apple Watch.

Companies have been working on smart ring technology and its functionalities for some time now. The applications of smart rings have expanded over the year such as payments, sharing information and health care facilities. Small-term companies like Thumb Track, Ringly, and Arcus are prominent players in the smart ring industry and marking its presence with few head-turning features.

However, Apple is one of the most prominent players in the smart devices segment to join the competition with its path-breaking technologies. Another well-known player and a big competitor for Apple in the industry is Amazon. The later one is trying to capture a lion’s share of the market with its Amazon Echo Loop. The official announcement was made in September 2019 by Amazon.

The biggest difference between the Smart Ring made by Apple and Amazon is the voice commands functionality that Amazon Echo Lopp could understand and access other devices by going through Alexa. However, the Apple Smart Ring uses predefined gesture technology which also includes point-to-gesture that can be used to interface with other devices.

Unlike Siri, Amazon’s Alexa has been a success in providing a voice assistant to control other smart devices. The openness of the technology, in the form os skills developed by Amazon, has allowed getting it adopted by a wide range of people. It was a huge blow to Apple which has been using its own voice assistant Siri, to control their smart devices. With the new Apple Smart Ring, the Cupertino based company can finally have an edge over Amazon.

Although the idea of Apple Smart Ring is very fascinating, it is still no more than just news. There have been no official announcements from the company about the smart ring yet. All we know so far is about the patents which are nothing more than ideas on a piece of paper. A similar patent for a smart ring device was filed by Apple back in 2015 too, however, nothing followed through. Almost every tech giants work on a lot of futuristic technologies simultaneous but only a few of those get rolled out.

We, for now, should take this no more than just a potential idea that could or could not turn out to be a product.