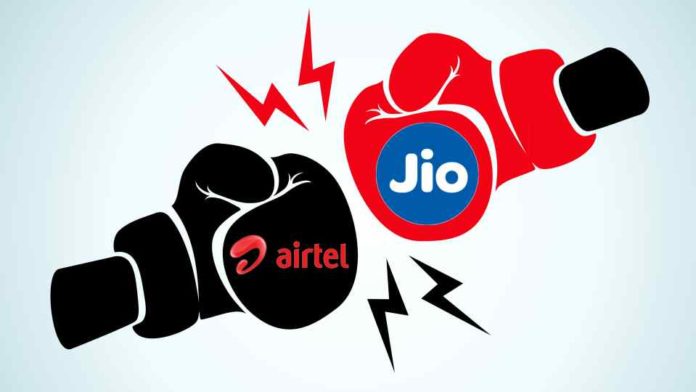 In a never-ending hyper-competitive telecom sector, fresh stir-ups are trite. Talking about rival telecom players, Bharti Airtel and Reliance Jio are at loggerheads yet again. Recently, allegations by Jio were filed to the Department of Telecommunications(DoT) wherein it accuses Airtel for violating Government’s license norms. In an attempt to sell Apple Watch Series 3, Airtel violates terms and conditions of Unified license by not setting up the eSIM provisioning node within Indian network infrastructure and this poses a major threat to national security. As an offset, Airtel on Sunday reportedly tosses aside these allegations by Jio.

Reliance Jio and Bharti Airtel have taken up the affair of selling Apple Watch Series 3 from 11 May via their sales channels. Apple iPhone and the Watch would have the same number and the subscribers can use both with an eSIM to operate with. The eSIM is paired with the iPhone SIM through a dedicated network node. The eSIM profile allocations contain user information that includes operator identifier, SIM details, PIN etc and uses the dedicated node for the same purpose. With the eSIM, subscribers can make or receive calls and at the same time, even book cabs.

Reliance Jio, recently came up with complains to the Department of Telecommunications (DoT), claiming that Bharti Airtel is violating unified licence (UL) conditions. The reason being, the network related infrastructure for pairing the Watch with iPhone isn’t set inside India. As per claims, this was a deliberate act by Bharti Airtel. Reportedly, in a letter to DoT, operator claims that the eSIM provisioning node and the node for Apple Watch Series 3 service are located outside India which is the gross violation to the Unified License terms. Unified License directs all telecom players that all equipment for network services must be incorporated within the country.

Breaking it down to details, Jio says that the Watch and iPhone share the same mobile number which with eSIM is feasible to do two contingent tasks, like make or receive calls independent of call status on the other device.

We request your good office to take severe action against Bharti and impose the strictest of penalties under the licence. Furthermore, we request you to direct Airtel to immediately stop this service and start it only upon complying with the requirements of national security and addressing the violations of the licence terms and conditions- Jio

To offer an uninterrupted connectivity service, carriers such as Airtel and Reliance Jio offer a dedicated network node. In order to protect sensitive information, the Unified License agreement states that carrier must set up network nodes within the country. But, Airtel has reportedly set the erstwhile base outside of India which risks user details being tracked by the foreign host country and breaches privacy code.

The Mukesh Ambani led subsidiary also alleges that it is not aware of any changes in the Lawful Interception Monitoring (LIM) of the Bharti-Mittal telecom firm and should have carried it out prior the service launch. Reliance, furthermore, claims that this is a breach of national security and is a “deliberate, gross violation” of Unified License norms.

Encompassing about 22 telecom circles, it is noteworthy that the maximum penalty a telco incurs due to the breach of licence conditions is Rs 50 crore per circle.

Airtel Thumbs Down At Jio’s Slurs:

Airtel, however in all sobriety, denies Jio’s accusations. As per recent reports by Hindustan Times, Airtel discards all the allegations by terming them as “another frivolous complaint by a desperate operator, who seeks a monopoly over everything that they do”.

It went on to clarify the security of it’s hosting in the country. The telecom firm’s spokesperson affirms that all information about users, network nodes are hosted in a secure manner by Airtel India and abides by provisions for lawful interception.

Both Airtel and Jio have been sharing a rivalry in the telecom sector and this latest spat, for a fact, is keen at intensifying the one-upping game further.