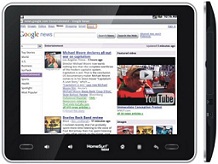 The enormous success of Apple iPad and Samsung Galaxy Tab has influenced many other vendors to launch similar Tablet Devices in cost constraint countries like India. Latest, Binatone, a UK based manufacturer of landline phones and GPS devices, has announced the launch of its Android based tablet in India today.

Company has named the newly launched device as “Home Surf Touch Tablet”, loaded with Android 1.6 and is quite a sleek looker, as reported by Techtree. The new Tablet device is equipped with an 8-inch resistive screen and supports Wi-Fi, 2 GB onboard storage and has 128 MB of RAM. The tablet is powered by an ARM 11 667 MHz processor. While the specs might not be top-of-the-line, you get a decent tablet for the price – especially when you compare the speculated price of the iPad and the Galaxy Tab (which are expected to cost way beyond the Rs. 30k mark) whenever they are launched in India.

In next 12 months Binatone plans to invest Rs. 50 crores towards technology, product development and marketing. A company spokesperson added that Binatone products are  ‘Indianized’ with special features like ‘Audio boost’, ‘Power saver’ and ‘Binatone Zone’, which all have been carefully market researched and implemented to address the specific Indian needs.

An attractive price label of Rs. 8995/-, surely the new device is going to be an eye-catching for users, specially when for them who wants to have hands-on experience on Android based Tablet with cost factor. However, it would be interesting to see how far “Home Surf Touch Tablet” satisfies the expectations of potential users.

Hopefully, we are going to get you a details review of “Home Surf Touch Tablet” soon. ! 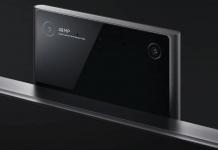 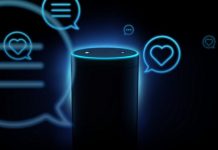 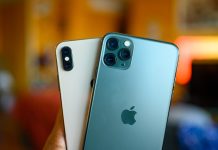