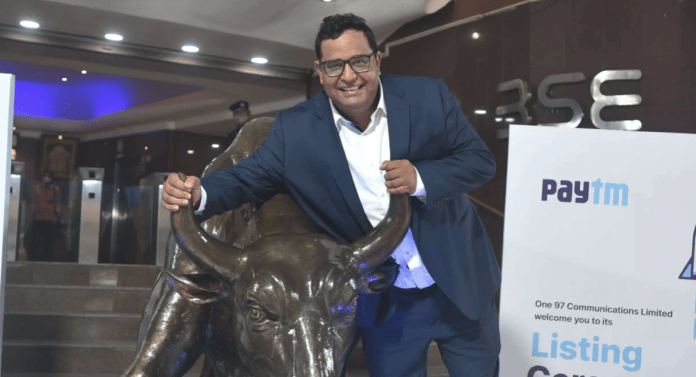 From the debut of India’s largest-ever IPO to hitting the lowest circuit in the stock market on the first day of trading Paytm (One97 Communications Ltd) has had a hell of a ride. The poster boy for digital payments in India, Vijay Shekhar Sharma, Co-founder & CEO, will always have the slight itching of becoming the first Indian entrepreneur in the unicorn club whose company got listed with the lowest rating on the market.

After the first day of trading, the valuation of One97 Communications tanked to $14 billion – a lot lesser than the estimated $20 billion when it was listed at an IPO price of Rs. 2,150. On the very first day itself, the shareholders of the company incurred a loss of a whopping $6 billion. In fact, the valuation of Paytm is significantly less now as compared to the valuation of $16 billion in 2019 when it raised $1 billion.

But looks like the worst is not over for Paytm yet!

After the first day of trading, the international broker Macquarie Capital Securities dubbed the company as a cash guzzler and finds that the Paytm share is not worth more than Rs 1,200 apiece – nearly half of the price of paytm share offered in IPO.

Suresh Ganapathy, and Param Subramanian, the analysts who wrote the report claim that “dabbling in multiple businesses prevents Paytm from being a category leader in any business except wallets, which is becoming inconsequential with the meteoric rise in UPI payments.”

Paytm has a market share of 65%-70% in the business of digital wallets and around 40% of the merchant-to-consumer segment based on the volume of transactions made by mobile payment devices.

The report also highlights the fact that Paytm is “a loss-leader” in the digital payment business.

“Competition and regulations will push lower unit economics, and/or decrease growth opportunities in the short time.” If the company doesn’t expand into lending and is able to make substantial profits by being just a distributor, thus “impeding their ability to the scale and profitability it needs,” it says.

The report is titled “Too many hands in too many pies is also a source of concern about the organization of the company.

“We are also not impressed by the complex organizational structure, the related-party transactions, the churn of top management, and a sluggishly-staffed board and 75% of the board members located in India,” states the report.

In addition, analysts have criticized Paytm juggling and struggling with various business segments in the past which failed to achieve market dominance or profit. In some strong-worded sentences, the report says that Paytm is just like a cash-burning machine that has spun off numerous businesses without any indication of reaching profitability.

Analysts point out that Paytm has raked equity capital worth Rs 19,000 crore since its beginning and that nearly 70 percent (Rs 13,200 crore) of that is used to finance losses. One of the flaws inherent to this business plan is the fact that it produces extremely low revenue for each dollar spent or invested in marketing.

“That Paytm has a problematic business model is illustrated by the fact that it generates very little revenue for every dollar spent or devoted to marketing. This is particularly problematic for a business with a low margin in the consumer sector in which competition across all verticals is only growing,” mentions the report.

The core business of Paytm payment via digital channels is massively affected by the government-backed UPI which is a real-time retail payment service launched by NPCI in December 2019. It is provided at no cost (zero discounted rate for merchants) to merchants and consumers and eliminates the wind from Paytm’s main business. UPI currently accounts for approximately 70% of Paytm’s overall value as a merchant, and analysts predict will rise by a further 85 percent by the end of FY’26. With this Paytm’s take-rates are expected to remain in decline.

It is also important to note that despite having the largest merchant network Paytm failed to secure the numero-uno position in the market by the number of UPI transactions. The market is currently dominated by PhonePe and Google Pay despite the government introducing 30% cap on the number of transactions each player can process in a month. Phone And Google Pe, together, account for nearly 80% of the UPI market by volume. In comparison, the Paytm app accounts for just 14.18% of the UPI market.

To ensure its continued existence, the platform has been forced to shift into a variety of other businesses to increase its profitability. It was looking to monetize by cross-sell/distribution of other products across its 50 million-plus strong active consumer base and 22-million merchant base. It was involved in numerous spin-offs over the last three years — cutting off consumer loans (2020) and Co-branded credit cards (2020) and the distribution of insurance (2020) and the management of wealth (2018) along with its micro-app-based platform (2020). But none of it has resulted in significant revenue or profit for Paytm.

The analysts think that Paytm is, at the very least could generate revenue of $350 million by distribution, and that figure is a bit high and more of the revenue will be realized only when it begins lending. While Paytm has been seeking a small finance banking license, it’s is proving to be a tough nut to crack as rules restrict them from entering the lending industry.

“Paytm is required to loan, i.e., use its own balance sheet to fund loans and earn a profit from it and for that it requires the banking license with credit underwriting experience, as well as infrastructure for collection. In reality, it is all currently lacking according to our opinion,” state the analysts.

The brokerage believes that obtaining a banking license is difficult due to the power of foreign investors. “Obtaining a small-scale finance bank license could be challenging, in our opinion, because Chinese-owned companies own more than a 30% share,” mentions the report.

This is why the brokerage house is expecting the stock to fall from its IPO record high. Paytm’s price, which is 26x FY23E’s price to sales (P/S) is high particularly when the company’s profitability isn’t evident for a long period of time.

“Most fintech players globally trade around 0.3x-0.5x PSg (price-to-sales growth ratio) and we have assumed the upper end of this band. We are unwilling to give it a premium here as we are unsure about the path to profitability,” the report concludes.

The DHRP filed by paytm has given analysts and experts an opportunity to look into Paytm performance and finances much closer than ever before. Unfortunately, the company failed to earn the confidence and support of a majority of analysts and fund managers who generally play a vital role in making an IPO a huge success.

The submission in its DHRP like below sounds very discouraging when it comes to a decision of investing in such a company.

The underwhelming response to paytm IPO, the unexpected fall of Paytm share value on the very first day of listing, and reports that evaluate Paytm share value worth no more than Rs 1,200 also raise questions on intention, capabilities, and the evaluation process of gung-ho institutional investors who have been recently pumped in a lot more than money in the company estimating it much higher than the value set by the open market on the very first day.

What is your take on the share value of Paytm? Will you buy the current dip or wait for it in the anticipation of further dip to buy at the right price as suggested above? Let us know your views in the comments section below.