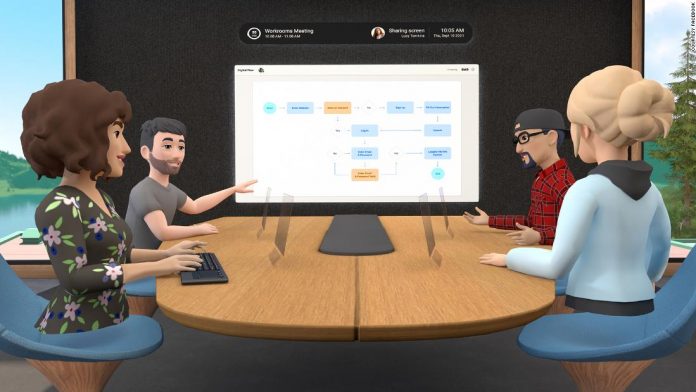 Technology knows no bounds, and neither do its users. Perhaps, that’s why Facebook has introduced Horizon Workrooms for those who don’t think Zoom meetings are a good enough substitute for the real thing. Facebook has launched a virtual reality app that lets you and your coworkers feel like sitting around a table in a conference room.

Facebook launched Horizon Workrooms on August 19, 2021. This app is free for Oculus Quest 2 headset users, which costs $299 onwards. It is the most ambitious attempt by the social media giant to allow groups to interact in VR, and to expand the use of the niche medium beyond gaming.

Up to 16 VR headset users can make use of Facebook Workrooms to meet in a virtual conference room. To make it look funkier, each avatar is a cartoon-like character that hovers slightly above a virtual table and appears as an upper body. The app can support up to 50 people in one meeting. The rest of the participants are able to join the virtual meeting as video callers, who appear on a flat grid-like screen within the virtual room.

Participants in meetings wearing Oculus VR headsets can use their hands and fingers to gesture in VR. Avatars’ mouths seem to move in lifelike manners while they speak. People can share images or make presentations on a virtual whiteboard.

Oculus, Facebook’s subsidiary, has been making efforts to make VR social interaction more popular than ever before for years. In 2016 and 2017, Oculus launched virtual-hangout apps Oculus Spaces and Facebook Spaces, respectively. It allows small groups to gather in VR. The company, however, shut down both VR apps in October 2019. Instead, it announced a virtual social world called Horizon, aiming for the launch in 2020. Looks like Mark Zuckerberg & Team is trying to crack some tough nut as Horizon is still not available for most users. Finally this week, Facebook confirmed that the app is still in private beta testing.

The possibility of working in a workspace may give users an idea of what Facebook is up to with Oculus. It also helps people to understand how well Facebook blended hardware and software since its acquisition of Oculus in 2014, besides hinting how much more time users will have to wait to have a perfect system in place.

In recent weeks, Facebook CEO Mark Zuckerberg and other tech industry executives have been quite vocal about visions for a “metaverse.” This term is a reference to a decades-old sci-fi dystopian idea for a virtual universe that offers an escape from everyday life. Despite having limited knowledge and understanding, tech executives speak optimistically about what such a metaverse could be, with Facebook going so far as to create a “Metaverse product group” under the leadership of Andrew Bosworth, VP of Facebook Reality Labs.

Although Facebook workrooms might seem a step closer to social virtual universe, it is not the vision Zuckerberg has presented to users.

The app uses a variety of technologies and tricks to make it feel as real as possible. Wearers of headsets can view their computer screen in VR using an accompanying desktop application. Facebook Workrooms uses both spatial audio and hand tracking to enable users to interact in a way that is similar to real life, albeit with few challenges.

It’s evident that Facebook still has some issues to work out; Bosworth, the Facebook executive, was giving a demo of Workrooms describing it as an interactive way to connect with coworkers virtually than video chat. His avatar suddenly froze mid-sentence. The pixels of its digital skin changed from flesh-toned to flesh-toned grey, before he had been disconnected.

Despite all the excitement, Facebook still has problems with VR, even with Workrooms. It must convince people, or in this case companies, to purchase its headsets and use them frequently. And it must adapt to new ways of interaction within virtual worlds.

Quest 2 can track hands, and even individual fingers, making it possible for users to do gestures naturally and make a sign within Workrooms. However, if you touch both hands together during a VR meeting, it’s probable that they will simply overlap in an awkward manner that disrupts the illusion of presence and reality.

The VR headset is the final component. Bosworth anticipates that users will use the app for around 30 minutes. A second team from Facebook is currently working to improve the ergonomics of VR headsets. Although it may not seem like much, the Oculus Quest 2 weighs in at just over a pound. This was noticeable during a half-hour meeting.