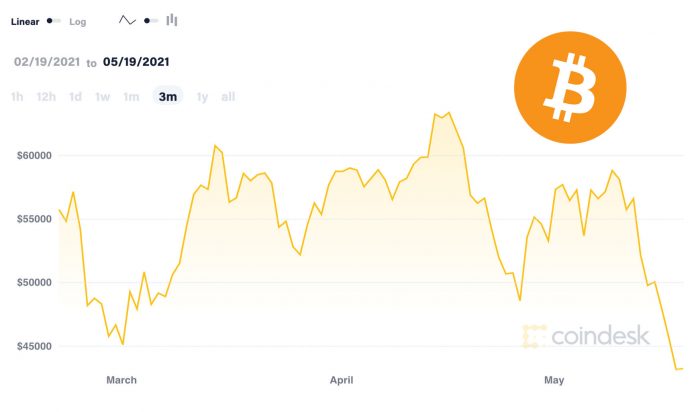 As reported earlier Bitcoin is staring at tough days ahead. On yet another disappointing day, Bitcoin value crashed to the lowest level in the last three months.

The world’s most valued cryptocurrency Bitcoin plunged 14% to touch $40,000 today, according to the CoinDesk data. This is the lowest value of Bitcoin in the last three months matching the trading value on the day of February 09, 2021.

If Tesla’s Elon Musk wasn’t enough to create a challenging scenario for Bitcoin, China’s latest move has made the market scenario worst for the world’s largest cryptocurrency by trading value. Just like India, China has instructed all financial institutions and payment companies to refrain from providing services related to cryptocurrencies anymore. The People’s Bank of China – the largest bank in China – has also issued a warning to investors to be highly cautious while investing in cryptocurrencies any further.

This is not the first time China is trying to clamp down on the highly volatile cryptocurrency market. Riding mostly on speculations, the value of all major cryptocurrencies have skyrocketed in the last few months and that’s when many countries have decided to take all precautionary measures against the digital currency. In 2017 as well Beijing shut down all cryptocurrency exchanges to deal with speculation that was riding the world’s largest crypto market to a new high.

On the other hand, Elon Musk is constantly passing feelers that are going against Bitcoin. Musk led Tesla Motors has recently suspended the sale of its electric cars in exchange for Bitcoin. The decision wiped off $300 billion from the estimated valuation of the whole cryptocurrency market in just one day.

As we reported last week, Musk is also planning to offload all the holdings of Bitcoin in the next few weeks. If that happens the market value of Bitcoin could tank to the lowest in 2021.

Traders and Investors who have recently bought Bitcoins are finding it tough to keep the excitement intact as the constant falling value of Bitcoin is taking the crypto market closer to the panic button. The stress sale of cryptocurrencies would definitely make the situation more worse for the entire cryptocurrency market and Bitcoin is no exception.

But there are many who are least bother about the recent fall in Bitcoin. In the last one year, between April 2020 and April 2021, the value of Bitcoin increased by 549% before it started to decline. Even if Bitcoin declines by another 20% – 30% there are many who would still be enjoying a cool profit of nearly 200% – 300% on their investment.

Whatever may be the case, the market conditions are not favouring cryptocurrencies, especially Bitcoin and the next few weeks are going to be tough. Whether Elon really offloads Tesla’s investment in Bitcoin, will countries like China and India decide to go easy on cryptocurrencies and how disastrous it would be for the crypto market are the questions that can be answered only after few weeks!