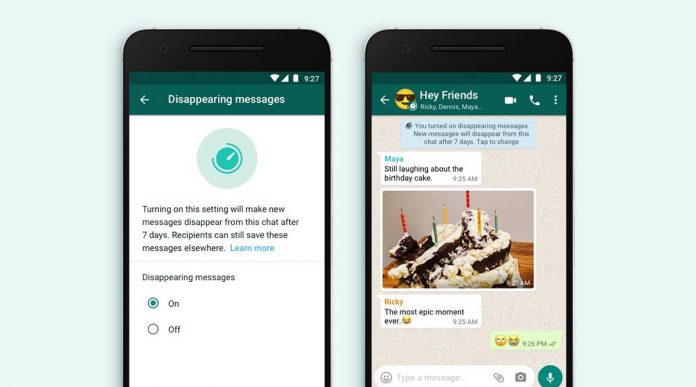 WhatsApp users can soon send messages that disappear within 24 hours!

According to the latest media reports, the Facebook-owned instant messaging giant is currently testing an option that will allow users to send messages which disappear within 24 hours on Android, iOS and Web.

Prior to this, WhatsApp had already introduced an option that lets its users send messages that disappear within a week or seven days. However, with the option which shortens the window of disappearing messages, now the popular chat app competes with the likes of Telegram that gives its users multiple options when it comes to disappearing messaging.

That being said, quite recently, WhatsApp was also spotted testing a voice message playback speed feature in a public beta. But it was soon removed in the subsequent beta update. So, can the 24-hour disappearing messages option suffer the same fate?

Well, as per WABetainfo, a platform that tests newly released WhatsApp features and publishes vital information about the chat app, the company will most likely not replace the 7-day option and instead include the 24-hour variant as an additional option.

WABetainfo has shared a screenshot that displays the 24-hour option in the section where users can both enable or disable disappearing messages for personal and group chats.

Earlier WhatsApp only let group admins control the Disappearing Messaging feature. But now, the Facebook-owned instant messaging app released an update for iOS, which, by default, allows all participants of a group to change the disappearing messages setting.

Besides disappearing messages, WhatsApp, which has over 2 billion users worldwide, is planning to bring the functionality of disappearing photos to Android and iOS platforms.

All in all, it is well understood the onset of these features must have stemmed from the ripple effects of all the bad press WhatsApp’s parent company Facebook has been getting due to the stunt it tried to pull earlier this year.

In January, WhatsApp started displaying an in-app popup asking its users to agree to the app’s renewed terms of service and privacy policy. WhatsApp wanted its user base to agree to share their data with Facebook, which, if they didn’t, would render them unable to continue using the Facebook-owned messaging platform post 8th February 2021.

This sudden prompt by WhatsApp was met with wide-scale backlash, and many users started fleeing to other more privacy-focused apps such as Signal and Telegram. Facebook, soon after releasing the situation was quickly heading south, rolled back the update. And now it seems to be releasing more privacy-focused features for WhatsApp to appease the chat app’s consumer base.

Do you think disappearing messages is a helpful feature? Let us know in the comments down below. We will keep you updated on all future developments. Until then, stay tuned.