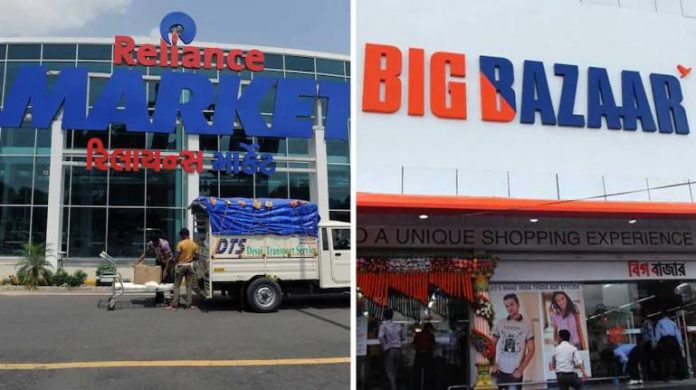 In a bid to salvage the ₹24,713-crore deal with Future Retail (FRL), Reliance Industries has stepped into the rescue of troubled FRL to make sure it doesn’t collapse amid its ongoing fight with Amazon!

Two sources in the know have revealed that the Ambani-led RIL, to accommodate the delays caused by FRL-Amazon legal battle, has also extended its internal deadline by at least six months for completing the acquisition of Biyani’s cash-strapped retail empire’s assets.

The NCLT aka the National Company Law Tribunal which was supposed to announce its ruling on Tuesday now has adjourned the case until 15th March.

The people in the know revealed that the lease/rental agreements Future Group had with landlords for its stores in some of the metro cities and tier-II locations have been transferred in the name of Reliance Industries in order to avoid defaults.

Future Group currently has close to 70,000 individuals working for them in over 1,500 Big Bazaar and FBB stores.

Apart from the transference of the rental agreements to Mukesh Ambani’s RIL, the sources also mentioned that Reliance Retail and Future Retail have already begun integrating the workplaces.

Several Future Group workers have started undergoing training required to be able to work in Reliance Retail stores. Also, soft launch plans and re-branding efforts are being carried out in full throttle to avoid any delay post the incoming of regulatory approvals.

These developments indicate that both RIL and Future Group are pretty much confident that NCLT will greenlight the deal despite the ongoing legal battle between Future Retail and Amazon. The Reliance-Future deal covers the confluence of six Future Group-owned companies and the subsequent sale of Biyani’s retail, wholesale, warehousing and logistics-related assets to two subsidiaries of RIL.

The Indian Supreme Court, in an interim order passed on 22nd February, halted the NCLT to proceed from approving the transaction. According to a person in the know, the SC will further hear on the matter again on 19th March and until then the NCLT has been asked to stand still until ordered otherwise.

Currently, before the arrival of the final verdict, NCLT holds the power to only allow the Future Group to take operational steps to fulfil the prosed deal with Reliance. However, it can’t let them hold any board meeting for the final clearance of the deal or seek the approval of shareholders.

Now, if the NCLT also reserve its nod to RIL and Future Group to proceed taking steps towards the deal, it will end up severely delaying the sale to Reliance. And, under such circumstance, RIL serves the right to walk away from it completely. And if that happens, thousands of employees currently working in Future Retail will become unemployed as the collapse of Future Group will become inevitable.

Thus, it now remains to be seen what card Future Group will play next in a bid to bring the ongoing legal fight with Amazon to and end.