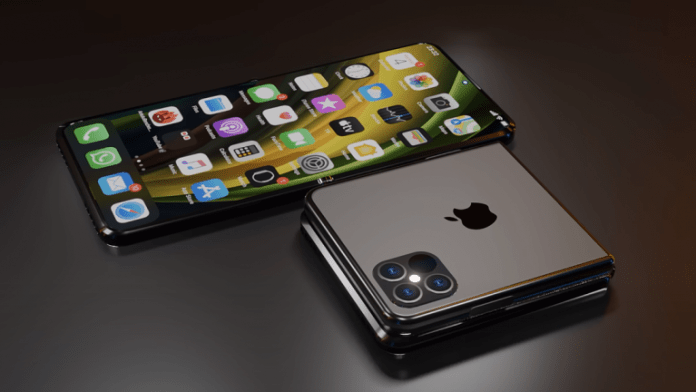 Move over Galaxy Z and Razr! This is exactly what you’d say once you have seen the latest iPhone 12 Flip video that is breaking the internet!

Though Apple has neither revealed any details nor confirmed that an iPhone 12 Flip device is in the works, a YouTube channel known as ‘ConceptsiPhone’ has released a new video to help the more ‘imaginative’ Apple fans to take a peek at what a foldable iPhone might look like.

The iPhone 12 Flip concept video succeeds in showing exactly what an absolute treat this rumoured Apple device could look like and be capable of even though at this point in time it is highly unlikely something similar is in works at Apple Inc.

Everything from the phone’s outer display to the full-screen layout of the device flipped open has been highlighted in the video and we must say it is total eye candy!

This highly creative and beautiful render presumes that the external display would probably be used for quick notifications before the device is flipped around the front which then resembles a lengthier iPhone.

The front display of this concept device still fashions the traditional iOS look when folded at an angle of 90-degree and shows various activity and clock widgets at the top of the screen. This is quite similar to what you will be observing in iOS 14.

Next, comes to the most exciting and impressive part of the entire video –  the incredibly realistic side by side comparison of the two iPhone Flips arranged on a wood-panelled surface shows off the contrasting sizes as one device lays unfolded while the other is shown folded up.

The folded iPhone 12 Flip when opens up and unfolds in a spin reveals the bezels of shiny aluminium with what seems to be a USB Type-C charge port. Apart from that, the forever iconic logo of Apple is seen intact at the same place where it has always been –  the top centre of the back of the phone.

Lastly, the video ends with a hefty price tag of $1,999 popping up on the screen. It is almost accurate in terms of what the most high-end foldable phones are being sold for these days and thus it will surely make the average Apple fan rethink about his or her decision to grab one if it ever gets released for real.

Earlier in this year, Apple filed a patent which suggests they are looking to produce devices which a curved hinge design however what the concept video shows is something which looks a lot like the Galaxy Z Flip – the foldable smartphone from Samsung quite identical to the concept iPhone 12 Flip. Therefore, even though the concept video is pretty amazing, it needs to be said that it is highly unlikely Apple will copy its competitor if they are to ever come out with their own foldable device.

Whether Apple is working on foldable iPhone or not, is anybody’s guess now. It’s a well known fact that the company work on almost 6-7 models simultaneously to find the best 3 to launch by the end of every year.

iPhone has been the biggest contributor to Apple’s overall revenue. For the last few years, however, the growth in revenue contribution of iPhone has been stagnated due to rising competition from Chinese rivals who are also gearing up to have a sizeable share of the premium smartphone market.

Apple is expected to launch iPhone 12 models by the end of this year, albeit with some delay. Internet is already abuzz with rumours and speculations related to the specifications and price of iPhone 12.

All said and done, we will most certainly not be able to see any device of this sort alongside other iPhone 12 models this fall even though this YouTube video has been calling it iPhone Flip 12. Stay tuned for more updates.