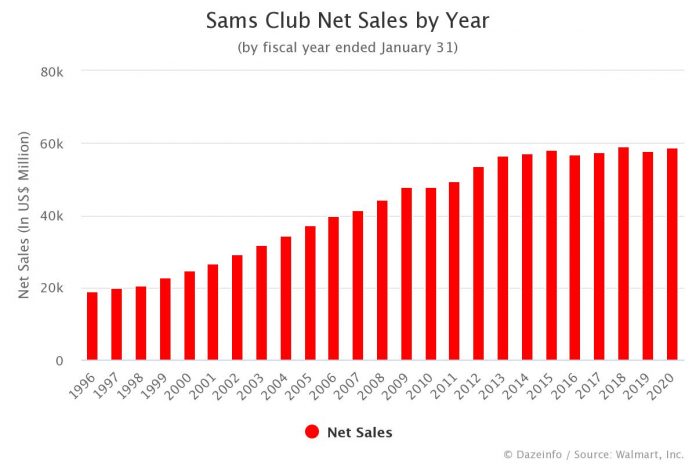 The above graph represents Sam’s Club net sales by year, starting from fiscal 1996 to the last completed quarter. Sam’s Club is an American chain of membership-only retail warehouse clubs, owned by Walmart Inc in 44 states in the U.S. and in Puerto Rico. In fiscal 2020, Sam’s Club generated $58,792 million worth of net sales, with a 1.6% YoY growth. The segment accounted for approximately 11% of Walmart’s total consolidated net sales during fiscal year ended January 31, 2020.

The fiscal year 2012 was the very first time when annual net sales for Sam’s Club segment crossed $50 billion milestone for the first time. Walmart reported an impressive 8.77% YoY growth in Sam’s Club net sales, amounting to $53,795 million ($53.8 billion). The segment accounted for over 12% of the company’s total fiscal 2012 net sales.