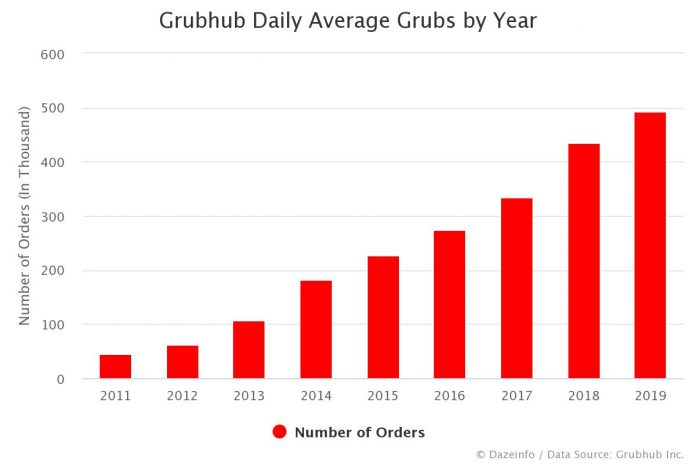 The above graph represents the average number of Grubhub daily orders by year, starting from fiscal 2011 to the recently completed year. The food delivery company received on an average 492,300 orders in a day during 12 months ended December 31, 2019. That’s a significant 12.9% YoY growth in the average daily orders placed on Grubhub’s platform.

It is important to note that Grubhub has over 22.6 million active diners as of December 31, 2019.

As the graph shows, between 2011 and 2019, the US-based food delivery company witnessed a significant YoY increase in the average daily orders placed on its platform.

In 2013, a whopping 107,900 orders, on an average, were placed on a daily basis using Grubhub’s platform. That showed a strong 74% YoY increase in average daily Grubhub orders. Interestingly, in just two years, the company witnessed more than 2x increase in its average daily grubs, totalling 227,100 in 2015.