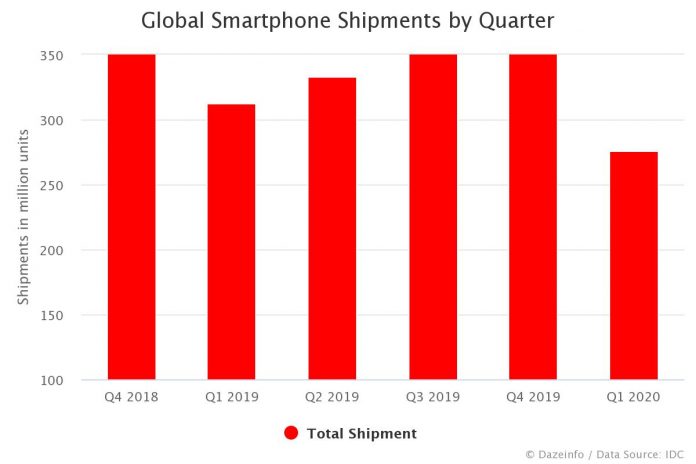 According to the latest report from IDC, all the big three of the global smartphone industry faced a massive blow. The smartphone shipment share of Samsung, Apple and Huawei declined significantly in Q1 2020. However, Xiaomi and Vivo managed to ail against the tide and strengthen its market presence further.

The smartphone shipment of Samsung in Q1 2020 reached 58.3 million units, 13.6 million lesser than the number of smartphones shipped by the Korean smartphone giant in the year-ago quarter. The performance of Samsung resulted in 21.1% of the shipment share with a significant decline of 18.9% YoY in Q1 2020.

The performance of Huawei was no different as well. Huawei could manage to ship 49 million units of smartphones in the latest quarter, which is 17% lower than the total number of smartphone the Chinese manufacturer shipped in Q1 2019.

Interestingly, Apple, on the other hand, managed to maintain its performance and didn’t lose ground. The shipment of iPhone in Q1 2020 reached 36.7 million, almost equal to the number of iPhone Apple shipped in Q1 2019. This is even more impressive considering the fact that Apple was severely criticised for its aggressive pricing strategy of iPhone 11, launched last year.

Here are some other highlights of the report:

What started as primarily a supply-side problem initially limited to China has grown into a global economic crisis with the demand-side impact starting to show by the end of the quarter,” said Nabila Popal, research director with IDC’s Worldwide Mobile Device Trackers

The COVID-19 outbreak that started from the mid of Q1 2020 and further resulted in the lockdown in Chain brought the whole smartphone manufacturing industry to a standstill. This caused the dismal performance of all the leading smartphone vendors worldwide.