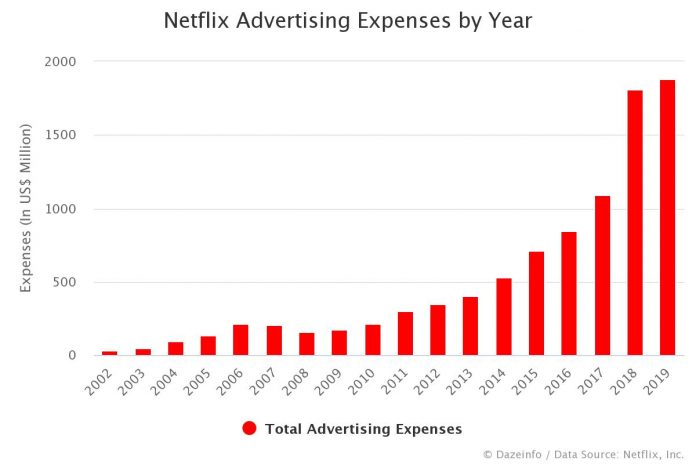 The above graph represents the Netflix advertising expenses by year, starting from fiscal 2002 to the recently completed year. Netflix’s advertising expenses during FY 2019 hit an all-time high of $1,879 million, up from $1,808 million in FY 2018. The $71 million increase in advertising spending was primarily due to the increase in the number of global streaming memberships due to increased International presence, as well as the growing content production activities, including Netflix Originals.

The advertising expenses of Netflix include the promotional activities such as digital and television advertising.

As the graph shows, the video streaming giant has significantly increased its advertising and marketing spending over the last few years, mainly to gain more eyeballs.

In 2014, Netflix advertising budget went up to $533.1 million, from $404 million in the previous year. That’s representing 31.96% YoY growth. Surprisingly, in just three years, the company has doubled its advertising expenditure as the number of global streaming subscribers also increased phenomenally. During 12 months ended December 31, 2017, Netflix poured over 1 billion on its content advertising across the world. The company reported an impressive 29.5% increase in its ad spend, from $842.4 million in 2016 to $1,091.1 million in 2017.