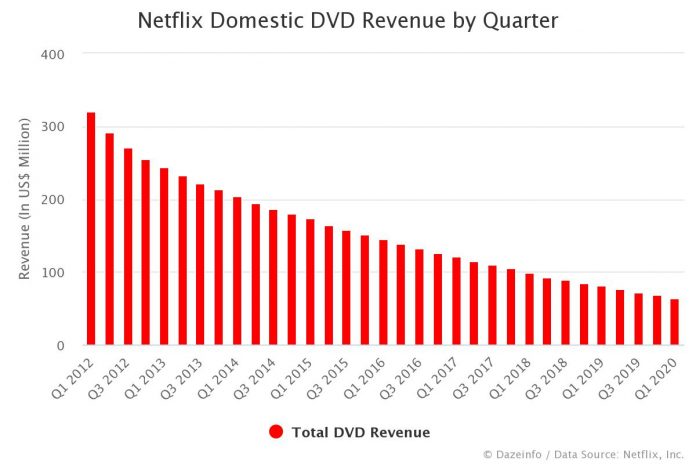 The above graph represents the Netflix DVD revenue by quarter, starting from fiscal Q1 2012 to the recently completed quarter. Surprisingly, despite the declining DVD revenue and subscriber base over that 8 years, the company continues to offer DVD-by-mail service in the United States. Netflix revenue from DVD services declined 18.4% YoY in Q2 2020, to an all-time low of $62 million.

It is important to note that DVD segment accounts for nearly 2.6% of Netflix’s total quarterly revenue from United States.

As the graph shows, Netflix DVD revenue has consistently been declining since Q1 2012 as the company is losing DVD subscribers in the US. In Q1 2012, Netflix quarterly revenue from Domestic DVD segment clocked $319.7 million, representing 36.8% of the company’s total revenue. In just three years, the company witnessed a notable 45.8% YoY decline in its US revenue from DVD, amounting to $173.2 million in Q1 2015. Surprisingly, in fiscal Q1 2018, Netflix quarterly revenue from DVD segment dropped to $98.75 million for the first time.