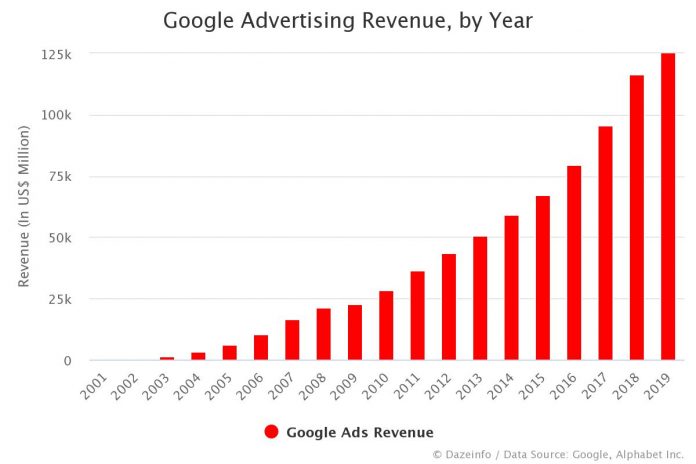 The above graph represents the worldwide Google advertising revenue by year, starting from fiscal 2001 to the recently completed year. Over 83.3% of Alphabet’s total revenue in 2019 came from Google advertising business. Google ads revenue reached an all-time high of $134,811 million ($134.8 billion) in 2019, representing 15.8% YoY growth.

One must note that every year, the majority of Alphabet‘s global revenue comes from its Google ads placed on Google’s own properties and Google Network Members’ properties.

Google LLC (formerly Google Inc.) was incorporated in September 1998, by Larry Page and Sergey Brin while they were PhD. students at Stanford University in California. Google is a subsidiary of Alphabet Inc., headquartered in Mountain View, CA, United States.

On September 1, 2017, Alphabet announced a new holding company XXVI Holdings Inc. to manage its “Other Bets”. At the same time, Google announced its plans of restructuring as a limited liability company, Google LLC, as a wholly owned subsidiary of XXVI Holdings Inc.