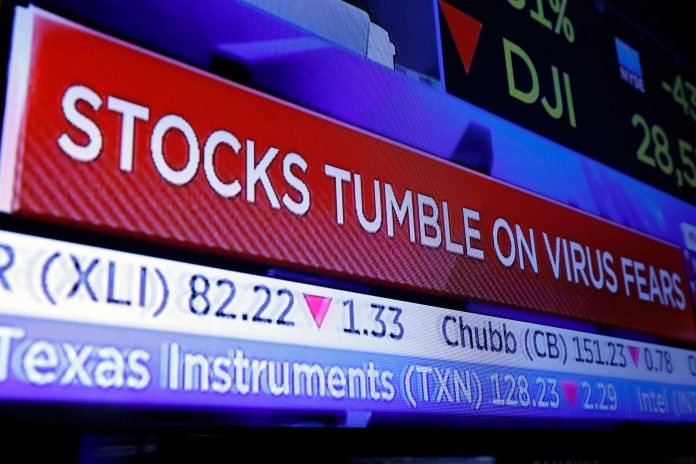 For the entire world, the deadly coronavirus outbreak which is causing the new COVID-19 disease has become a big menace and a nightmare. Apart from the thousands of victims the disease has infected and killed, now, it seems like its the global economy that is next on its way to get devoured by it. The global financial markets have been absolutely roiled over by the concerns over the coronavirus.

It has been recently reported that Coronavirus, over the past month, has been the central reason for the loss of hundreds of billions of dollars in the form of paper wealth, by multiple billionaires of the world.

The fear of the coronavirus outbreak slowing down the global economy finally caught up to Amazon which in turn sunk its share price. This caused Jeff Bezos, the current richest man of the world to lose a whopping $7 billion in paper wealth and more than $18 billion over the past month.

At Monday’s open from Friday’s closen last week, as the global e-commerce giant Amazon’s shares fell 7%, a massive overnight drop of $110 billion down from $117 billion was observed by the company’s Chief Executive Officer, Jeff Bezos. Over the past month itself, Bezos’ wealth took a huge hit by falling from $129 billion even though midafternoon on Monday a slight recovery was observed in Amazon’s shares.

Jeff Bezos is not the only one suffering from the financial impact of Coronavirus. A $4 billion worth of paper wealth was lost overnight by the Chief Executive Officer of Tesla, Elon Musk, who reportedly called out the coronavirus panic as dumb on his twitter handle.

That huge chunk of loss adds on to more than $12 billion in losses for Elon Musk in February. However, Musk is still doing good at up about $4 billion for the year, considering the huge gains in the month of January by Tesla.

It was recorded that the shares of Tesla recently went through a 10% slump, however, having stayed up year to date more than 53%, rose a whopping 126% over the past twelve months.

That’s not all. It is the billionaire Bernard Arnault, LVMH chief, who is being suspected to have been lost the most to the onslaught of the fear of the coronavirus. It has been reported that he has had an overnight loss of over $6 billion as luxury happens to be very vulnerable to economic and stock instabilities. Since January the share of LVMH fell 24%. In just two months worth of time, the billionaire who passed Bill Gates to hold the position of the second richest man, Bernard Arnault saw his paper wealth take a $30 billion hit. Now, at $20 billion shorter than Gates, he has moved back to square one to reclaim his position at 3rd in the list of world’s richest people.

No list of billionaires can be concluded without Warren Buffett – the oracle of ohama and Chief of Berkshire Hathaway. He too has taken a hit with his paper fortunes falling to $4 billion, which over the past month, has now brought his total losses to $12 billion.

Coronavirus: A Serious Threat That Can Topple Global Economy?

The UN’s trade and development agency has recently warned that this year, the coronavirus outbreak could cost the global economy up to humongous USD 2 trillion. The UNCTAD said that in some countries, the shock from the epidemic can easily cause a recession and that the global annual growth can depress to below 2.5 per cent.

The ripple effects of the Coronavirus are now seemingly become clearer as days go by and is no longer being taken lightly by global business leaders As of the last week of February, the world’s top 10 billionaires have officially lost $80 billion and that in itself is a huge warning bell for the upcoming disruptions that can potentially topple the global economy.