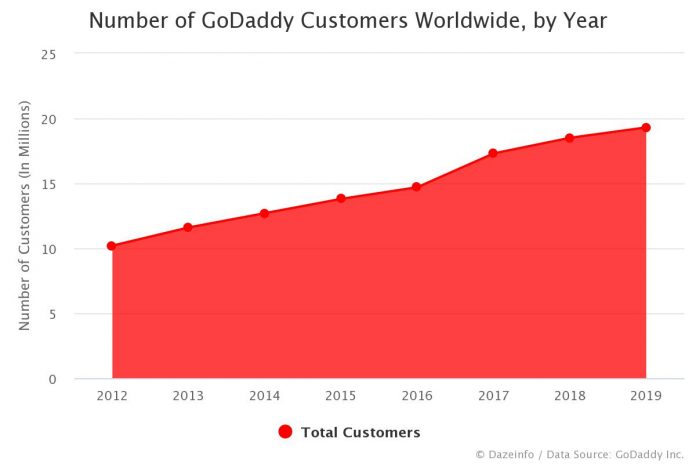 The above graph represents the number of GoDaddy customers by year, starting from fiscal 2012 to the recently completed year. GoDaddy’s global customer base increased 4.1% YoY in 2019, to an all-time high of 19.3 million (19,274 million to be precise).

The growth was primarily resulted from the increased international presence, the ongoing marketing and advertising initiatives and the company’s enhanced and expanded product offerings.

Note: GoDaddy define a customer as an individual or entity having an account with one or more paid product subscriptions at the end of the year. A single user may be counted as a customer more than once if the user maintains paid subscriptions in multiple accounts.

GoDaddy Inc. (NYSE: GDDY) is the world’s one of the largest internet domain name registrar and web hosting company. In 1997, Bob Parsons formed a company named “Jomax Technologies”, which later became GoDaddy. On May 28, 2014, the company was incorporated in Delaware.

In 2005, GoDaddy became the largest ICANN-Accredited registrar on the Internet.

In January 2009, GoDaddy began offering .IN domain names to small businesses in India. While in June 2012, the company launched its full-scale operations in India which soon became the company’s largest international office.

In July 2011, GoDaddy Group Inc agreed to be bought by a private equity consortium led by KKR, Silver Lake, and Technology Crossover Ventures, for about $2.25 billion.