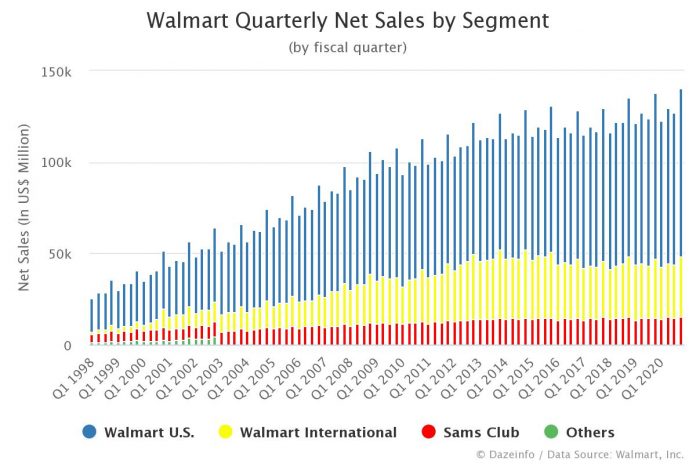 The above graph represents the Walmart quarterly net sales by segment, starting from fiscal Q1 1998 to the recently completed quarter. The company has three operating segments – Walmart U.S., Walmart International, and Sam’s Club. In FY Q4 2020, the quarterly net sales of Walmart increased a 2.1% YoY to $140,608 million ($140.6 billion), globally. Out of that, over 65.6% came from the Walmart US segment, followed by Walmart International and Sam’s club segments.

Walmart U.S. segment has always been contributing the most to the company’s total net sales. In fiscal Q4 2020, Walmart US segment accounted for a whopping 65.6% of the total net sales recorded by the company. During the quarter, Walmart’s US net sales amounted to $92,271 million ($92.3 billion), representing nearly 1.9% YoY growth.

It was the first time in fiscal Q4 2004 when the quarterly net sales from Walmart US surpassed the $50 billion mark.

Walmart International is the second-largest segment, operates in 26 countries outside of the U.S. This segment recorded $33,049 million worth of net sales for Walmart in fiscal Q4 2020, accounting for 23.5% of the company’s total net sales.

The highest net sales recorded by Walmart International segment was back in Q4 2013 which was $37,826 million.

Sam’s Club currently operates 599 membership warehouse clubs in 44 states in the U.S. and in Puerto Rico. It is a membership-only warehouse club that also operates samsclub.com. This segment registered $15,288 million worth of net sales in fiscal Q4 2020. That’s a 2.6% YoY growth in Sam’s Club net sales.