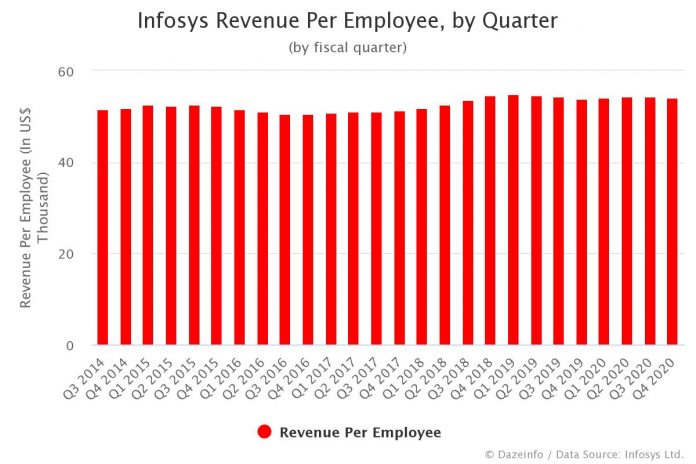 The above graph represents the Infosys revenue per employee by quarter, starting from fiscal Q3 2014 to the recently completed quarter. The company is generating on average $54,100 from each of its full-time employees as of March 31, 2020. Infosys revenue per employee in FY Q4 2020 increased a negligible 0.19% YoY. Infosys quarterly revenue clocked $3,197 million in FY Q4 2020.

As the graph shows, since FY Q3 2014, the company has been generating more than $50,000 from each of its full-time global employee.

In February 1993, Infosys went for its initial public offerings (IPO) with an offer price of ₹95 per share and got listed on stock exchanges in India in June 1993. In 1999, Infosys became the first IT Company from India to be listed on NASDAQ. The company has its primary listings on the BSE Ltd. and National Stock Exchange of India Limited. The company’s American Depositary Shares (ADS) representing equity shares are listed on the New York Stock Exchange (NYSE).

Started from an initial capital of $250, Infosys has grown to become a $49.16 billion company in terms of market capitalization. It is also listed on Forbes Asia’s 200 Best Over A Billion 2019, with annual revenue of $11.8 billion.