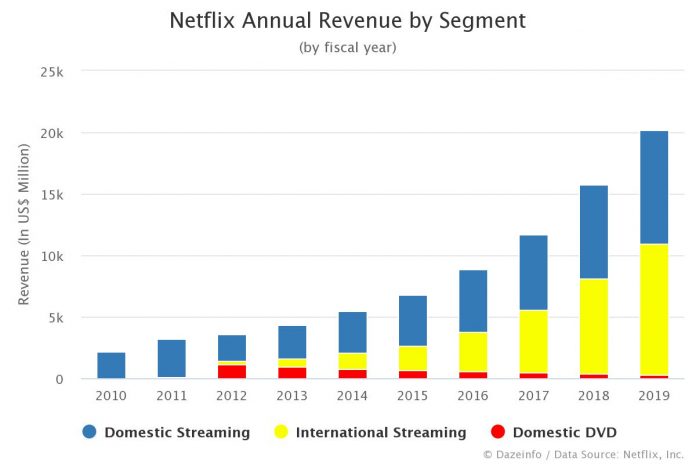 The above graph represents Netflix annual revenue by segment, starting from fiscal 2010 to the recently completed year. Currently, the company has three reportable segments: Domestic Streaming, International Streaming and Domestic DVD. Approximately 52.7% of Netflix global revenue in 2019 came from the International streaming segment.

One must note that Netflix Domestic and International streaming segment revenues, both reached a record high in 2019, while the Domestic DVD revenue declined to a record low.

Netflix revenue from International Streaming segment also reached an all-time high of $10,616.2 million in 2019, with a whopping 36.4% YoY growth. The growth was primarily led by the fourth quarter of 2019.

In September 2010, Netflix began its international operations by offering an unlimited streaming plan without DVDs in Canada. With just three months, the company generated $3.62 million in revenue from its streaming services outside the US.

As the graph shows, Netflix Domestic DVD segment revenue has consistently been declining since 2012.

In 2012, Netflix annual revenue from DVD-by-mail membership services in the US clocked a record-high $1,136.87 million. In just one year, the domestic DVD revenue declined 20% YoY to $910.8 million.

Surprisingly, in 2019, Netflix revenue from Domestic DVD segment declined to the lowest-ever $297.2 million.