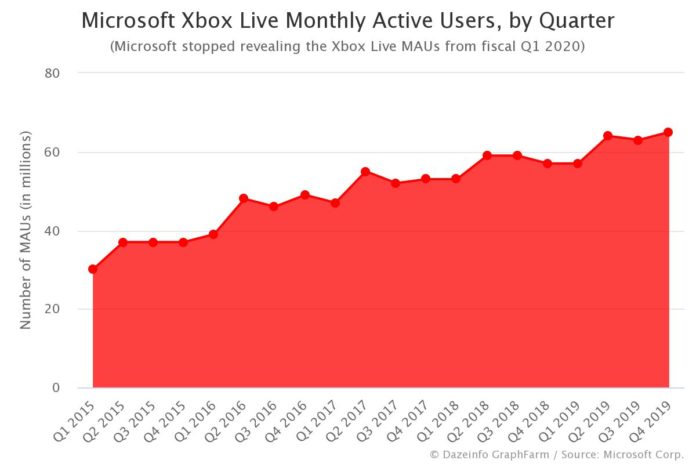 The above graph represents Microsoft Xbox Live monthly active users, by fiscal quarter. Microsoft stopped revealing the number of Xbox Live MAUs from fiscal Q1 2020. Instead, the company reported “Xbox Content and Services Revenue” in its quarterly report. The Xbox Live MAUs in fiscal Q4 2019 grew 14% YoY to 65 million – highest-ever in history. It was a 3.2% or 2 million increase when compared to the previous quarter.

Interestingly, the number of monthly active Xbox Live users in fiscal Q2 2017 had grown 14.6% YoY, reaching 55 million for the first time. This was mainly due to the holiday season and the increasing sales of Xbox One and Xbox One S (launch on August 2, 2016).

It is important to note that the second quarter of every year (during Oct-Dec) has always been the most promising quarter for Microsoft as more and more people came and used Xbox Live service.

On March 14, 2003, Xbox Live was launch in eight European countries including France, Germany and the United Kingdom, Belgium, Italy, the Netherlands, Spain and Sweden.