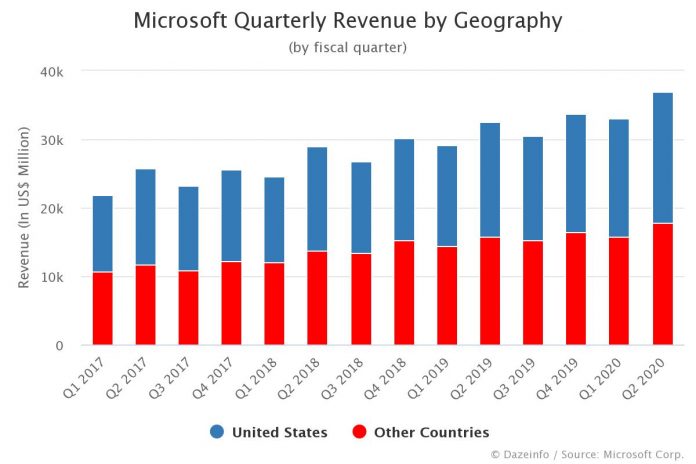 The above graph represents Microsoft quarterly revenue by geography, starting from fiscal Q1 2017 to the most recent quarter. The quarterly revenue is classified by the major geographic areas in which the company’s customers are located. Nearly 52% of Microsoft’s total revenue in FY Q2 2020 came from the United States. Microsoft revenue from the US reached an all-time high of $19,149 million in FY Q2 2020, representing an impressive 14.1% YoY increase. On a quarterly basis, the US revenue increased 10.88%. The other countries revenue also increased a significant 13.2% YoY to $17,757 million during the second fiscal quarter. The contribution of other countries to the company’s total revenue was 48.1%.

Microsoft Revenue from US & Other Countries: History

Microsoft quarterly revenue from the US crossed the $15 billion mark for the first time in fiscal Q2 2018. The company generated nearly 52.3% of its total revenue from the United States, totalling $15,110 million ($15.1 billion).

Similarly, Microsoft quarterly revenue from other countries surpassed the $15-billion barrier for the first time in fiscal Q4 2018. The company recorded an appreciable 25.5% YoY growth in its other countries revenue, clocking $15,253 million ($15.3 billion) during the fiscal fourth quarter.

Note: Microsoft says, no sales to an individual customer or country other than the United States accounted for more than 10% of revenue.